Apple's latest iPad may be boring, but it's the perfect tablet for most people There's one word that sums up Apple's latest iPad: safe.

The new 9.7-inch device debuted earlier this month at an education-focused event in Chicago. Apple seemed to bill the device as the perfect option for schools, but as a sensible consumer product, too.

The new iPad has a more powerful A10 chip built in and has support for Apple's R 199 stylus, called Apple Pencil. But the new iPad lacks a certain freshness. It's not a design risk like the iPhone X, nor is it a true low-cost, kid-friendly-ish option like the iPhone 5c. The new iPad's design has been recycled, its guts have been — nearly — duplicated, and even its cost remains the same (unless you're a school, teacher, or student, in which case, the price is now 10% cheaper).

This isn't necessarily a bad move on Apple's part, though.

For anyone who's actively shopping for a tablet for the first time, someone looking for a lower-cost MacBook replacement, or for an iPad fan in desperate need of an upgrade, the new iPad is the perfect choice.

In fact, I've spent the last week using the newest iPad with an Apple Pencil, and it's already filled a technology gap I didn't even know I had.

First things first: this is not a device for kids. Let's get one thing out of the way right off the bat: It's absurd that Apple is marketing this iPad as a practical option for schools.

There's nothing about the new iPad's design that differentiates it from other models or makes it well-suited to kids. It doesn't come with a protective case and it isn't any more durable than other iPads. It has a large glass screen, and if it breaks, it's really not easy to repair. If adults are prone to breaking their expensive devices, why does anyone at Apple think children will fare any better?

It's also odd that the new iPad is being presented as a reasonably priced option. At R3 933, it costs the same as last year's model — even the R357 education discount is identical. Plus, in order to for schools to give their students the best iPad experience, they'll need to buy accessories like a case, and an Apple Pencil (R1 072 for schools) or Logitech Crayon (R595).

While I'm sure kids would be thrilled to have an iPad to use in their classrooms, it just doesn't make a lot of sense from a financial standpoint — especially when there are more affordable, less vulnerable computers out there.

Apple Pencil doesn't seem like a great tool for children, either. One of the few new things about the iPad is that it supports Apple Pencil, a feature previously reserved for the iPad Pro.

I honestly loved using the Pencil, and it quickly became one of my favorite Apple products I've ever used (more on that later). But over the course of testing the iPad and the Pencil, it became increasingly obvious that this is not a product I would ever give to a child.

For one, in order to charge up or pair Apple Pencil with your iPad, you have to plug it into the Lightning port at the bottom of the iPad. The Apple Pencil sticks straight out of the tablet like a weapon, which doesn't seem all that kid-friendly.

The Apple Pencil is also both very expensive and very easy to lose. It doesn't attach to the iPad in any way (unless you're charging it — but again, that makes it a weapon), and I frequently faced the issue of where to store it so I didn't lose it. The Pencil is slippery and rounded, and kept rolling off my desk or any table I set it on. It also has removable cap, which isn't attached to the Pencil at all. Not only is the cap a choking hazard, but it seems laughably easy to lose as well.

I'm a 26-year-old person who rarely every loses things, and even I was constantly concerned about misplacing or dropping the Apple Pencil — I can't imagine how a child would keep track of it.

From a consumer standpoint, though, there's a lot to love about the iPad. One knock against the iPad is that Apple didn't really change its design from previous models. It's a safe choice, and it's hard to get excited about a product that looks exactly like last year's version.

I don't think this is the greatest decision on Apple's part, but I am starting to see the merits after a week of using the device. By prioritizing function and cost-effectiveness over cutting-edge design, Apple made an iPad that's reasonably priced for consumers and remains easy to use for most people. If Apple had released an iPad with an iPhone X-like design — which it still might do! — it would have been going too far in the other direction. I feel like I was able to get more use out of the iPad because it was somewhat basic and boring — I wasn't wasting time fiddling with Face ID or trying to figure out which iPad apps worked well with the notch.

If the iPad is a truly being positioned as a productivity tool, keeping the old design is the best choice — at least for now.

At 9.7 inches, the new iPad is the perfect size. 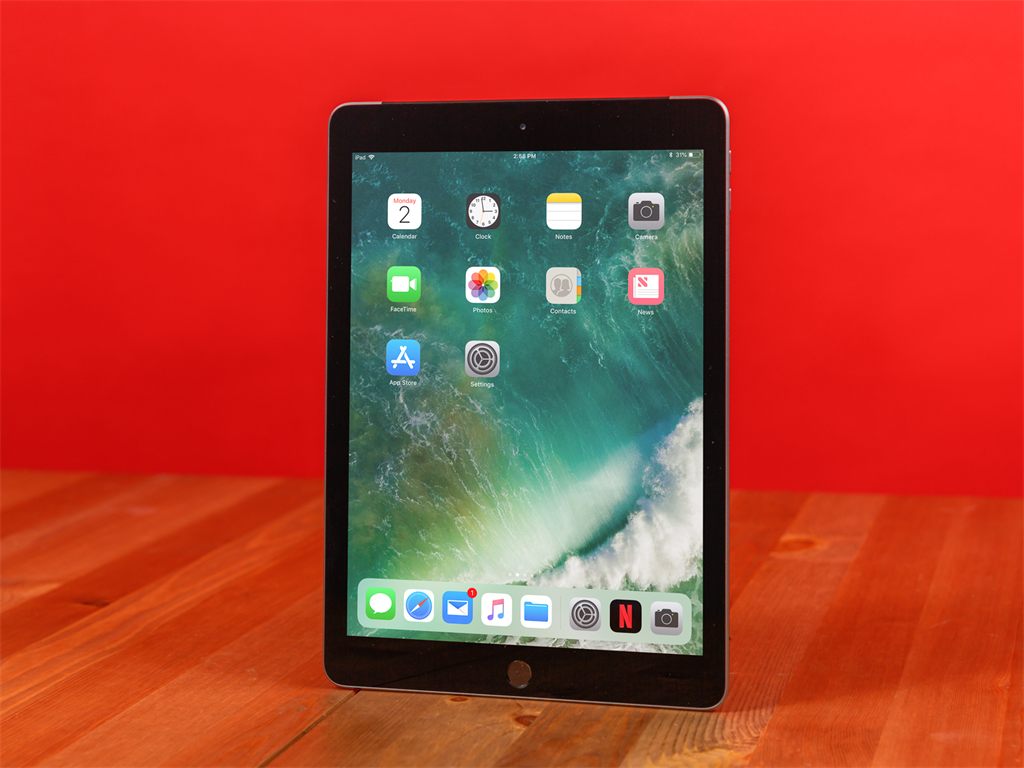 Throughout my week of using the iPad, I kept noticing how the screen struck the right balance between being big enough to enjoy movies, TV shows, and books, and not too big that the device became unwieldy. The iPad fit perfectly in my backpack, was comfortable to hold for long periods of time. It immediately and perfectly complemented my MacBook Air in terms of convenience and portability.

If you're considering buying an iPad, I'd highly recommend this size. For any type of video or heavy screen use, the iPad Mini 4 would be too small, and the 12.9-inch iPad Pro is almost ostentatious, it's so huge. The 10.5-inch iPad Pro would probably be OK for anyone with larger hands, but is a bit too big for me to comfortably hold.

For me, Apple has found the sweet spot with the 9.7-inch iPad. I hadn't gotten the chance to use iOS 11 on an iPad before this past week, and I was immediately impressed by how seamless and functional it is.

On iPad, you can multitask between two apps at once and more easily switch between apps. There's an app dock at the bottom that you can pull up when you're using any other app, which makes using the iPad feel closer to a MacBook — in a good way. You can also drag and drop content between apps, which is a simple but useful trick.  All of that combines to make the iPad an excellent work tool. Thanks to iOS 11, I didn't have to sacrifice the ability to take notes, answer emails, monitor social media, and surf the internet while using the iPad. At the same time, I was able to leave my laptop behind more often and work off the iPad.

I don't think the iPad could ever replace my MacBook, but it quickly became one of my most-used devices.

I quickly fell in love with Apple Pencil. I had never used an Apple Pencil before testing it with the iPad, and it immediately became my favorite part of using the device.  I used the Pencil for everything, from taking handwritten notes in meetings, to writing to-do lists, to drawing and coloring. The Apple Pencil is able to sense pressure, so I could bold important points in my notes or sketch lightly on a drawing pad. Plus, there was virtually no lag from when the I started to write or draw something to when it appeared on the screen, which is no easy feat for digital displays.

I'm not exactly an artist, but using the iPad with the Apple Pencil allowed me to exercise my creativity, something I don't always find time to do in my day-to-day life. I could practice calligraphy one minute and paint with watercolors the next, or relax with a coloring book. I could see the iPad-and-Pencil combination being perfect for designers or artists, or for anyone who just likes to dabble.

That said, Apple Pencil is still too expensive for most people. While R3 931 for an iPad feels like a decent deal, R5 122 to add the Apple Pencil still seems too expensive.

In the end, you're paying R1 999 for a glorified pen. You don't need to have it to enjoy using the iPad, and if you do buy it, it's easy to see how the novelty might wear off over time.

I absolutely loved using the Apple Pencil, but even I couldn't justify the price. Here's hoping Apple considers discounting it — or better yet, including the Pencil along with the purchase of an iPad.

So, should you buy the iPad? After a week with the iPad, I still can't fathom how it's a practical option for children. There are more realistic options on the market from companies like Microsoft and Google, particularly if you're buying this for a kid who needs to write essays — which, let's face it, is most students.

But for anyone else — young professionals, people who are retired, people who like to travel, or even college students — this is the most sensible iPad you can buy, and possibly the best tablet in the world.

The iPad may not be flashy like the iPhone X or powerful like the MacBook Pro, but out of every Apple product you can buy, the iPad checks the most boxes: It's convenient, portable, great for work and pleasure, and at a price point people can actually afford.

If you're a regular consumer considering buying a tablet, you can't go wrong with the 9.7-inch iPad.