Apple will release its next major iPhone software on September 19. Here are 10 new features worth getting excited about.

At Apple's "By Innovation Only" event on Tuesday, the company announced that the next major update to the iPhone operating system will arrive on Thursday, September 19 - just one day before it launches its new iPhone 11, 11 Pro, and 11 Pro Max phones.

Announced at Apple's Worldwide Developer Conference in June, iOS 13 adds a bevy of new features and updates to existing apps, like Reminders, Notes, and Mail. We're also looking forward to a handful of quality-of-life improvements that will really change the way we use our phones.

Also read: Apple has just launched a new iPhone - with an entirely new version of a selfie

To download iOS 13, just visit the System Preferences application on September 18 and wait for an "Upgrade" button to appear. You can watch social media to see when it's available, but the update usually goes live shortly after noon Eastern time.

If you're looking for an idea of what iOS 13 has to offer, take a look at 10 features in iOS 13 worth getting excited about. Apple says Face ID unlocking will be 30% faster, app downloads will be 50% smaller, and app updates will be 60% smaller in iOS 13. Apps will also launch up to two times faster than before, thanks to an improved animation. Dark Mode is nice and easy on the eyes, and perfect for reading in the dark. Apple updated the image-editing controls in iOS 13 to be more robust and intuitive. Automatic adjustments are still there if you want them, but you can also dig into the settings to tweak the sharpness, colour, and contrast of your photos and videos, and even add filters.

But what's truly new and notable here is that all of these new photo settings can finally be applied to videos for the first time. You can also rotate videos from portrait to landscape (!), and you can even warp the look of your videos or adjust their aspect ratio. This is going to make it way more satisfying to film and edit videos on an iPhone. Apple Maps is about to get way more detailed - first for US cities in 2019, then eventually the rest of the world in 2020.

The Maps themselves will have significantly more up-to-date details about roads, buildings, parks, and even beaches.

Apple is also adding a new "Look Around" feature, which is similar to Google's Street View: It lets you move down streets from a first-person perspective and scan areas in a 360-degree view. Also, like Google Maps, you'll be able to add your favourites and create collections of places that you can easily share with friends. It looks like a really solid update.

Finally, the Mail app is getting rich text support. You'll be able to adjust your font style, size, colour, and alignment of your text, with the ability to indent and add bulleted and numbered lists. This is going to be crucial for anyone who relies on Apple's Mail app to send work emails. Apple is taking a page from productivity apps like Things 3 to make its Reminders app easier to use and more robust.

Siri will also be able to suggest new reminders based on what you're doing. So if someone messages you to make plans, Siri can automatically create a reminder for you. 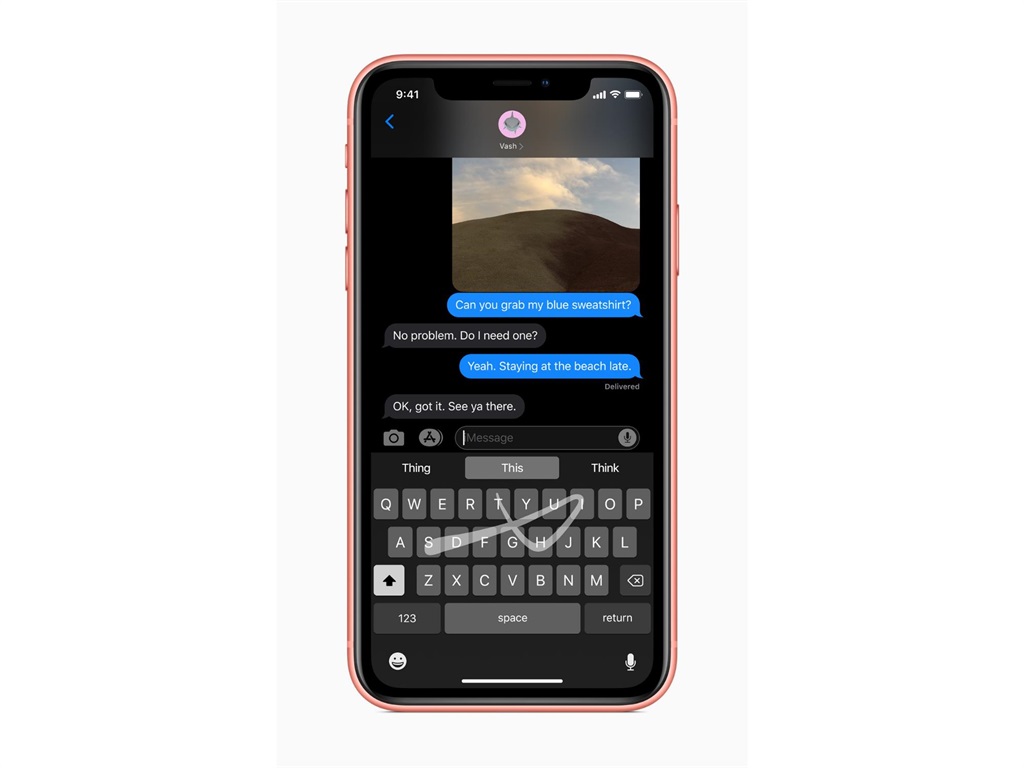 Lots of people like third-party iPhone keyboards that allow you to swipe to type, and that's exactly what Apple's new QuickPath Typing can do.

In iOS 13, Apple's on-device machine learning recognizes the path you're drawing and converts it all for you into text. This should make one-handed typing much easier. Some applications may want your name or email to send you information outside the app, and they are allowed to request this information, but Apple built a solution for people worried about privacy: You can still choose to share your actual email address with apps or services - or you can choose to hide it.

If you want to hide your email address, Apple will create a random unique address that forwards to your real email address, which you can disable at any time. YouTube/All I Talk Is Tech

Voice Control in iOS 13 will let you control your entire iPhone - you read that right, the entire phone - using only your voice.

This is an accessibility setting Apple has been working on for a long time, but basically voice control is now system-wide, and extremely comprehensive.

You can navigate and type using voice commands and gestures, since everything on the screen will have numbers and names to allow for easier control. Searching your chats in Messages is now way easier thanks to improved search, which can now scan texts, people, photos, links, and locations so you can better find what you're looking for from past conversations.

There is much more to discover in iOS 13. Check out Apple's complete list of features coming to iOS 13.