1. The rand is look weak this morning, last trading at R14.91/$. The big economic headlines this week will be the employment numbers for the second quarter, and the producer price index for August, both expected on Thursday.

2. Following the resignation of a key director, Nombulelo 'Pinky' Moholi, last week, all eyes will be on Old Mutual for more signs of dissent within the board. More.

3. SA's three biggest medical schemes have now announced their price hikes for next year, and it ain't looking pretty: on average, Bonitas will increase its contributions by 9.9%, Discovery by 9.5% and Momentum Health by 8.3%. More.

4.  Investec has warned of a fall in profits for the first six months of the year, with Brexit impacting its UK banking business. It said a fall in revenue and costs meant that adjusted earnings per share would fall by between 4% and 7%. More.

5. Zimbabwe’s central bank has frozen bank accounts belonging to the country’s biggest fuel supplier, as well as the largest car dealership, in what is believed to be efforts to stabilise a plunging currency.  Meanwhile, the worst drought in almost four decades, cyclone-induced floods and an economic collapse have left Zimbabwe on the verge of its worst-ever famine. More.

The 7 most disappointing features in iOS 13

iOS 13 is finally here. But it's not all sunshine and roses.

Apple's latest operating system update for the iPhone brings some major improvements, like a system-wide Dark Mode, a handful of updates to Apple-made applications, a swipe-to-type keyboard, and more.

Unfortunately, Apple also made some changes that I personally don't like, and don't understand.

While there's a lot to love about iOS 13, here are the 7 most disappointing features from the new iPhone update.

1. Apple should have done more with Apple Mail, which received a minor update but still lacks basic features that other email apps have. Apple Mail is nice and clean, but it still lacks a lot of the features I want in an email app.

Apple Mail now has rich text, but it still has no ability to label your emails in different ways other than to flag them. (See how many "Flagged" emails I have?)

Apple's Mail app also doesn't sort your emails in ways that other email apps do - like when it detects an email contains a plane ticket, or a receipt. Edison Email, a free mail app I've been using for the past several years, can automatically categorize your emails into "subscriptions," "travel," "packages," "bills and receipts," and "entertainment." I'm still waiting on Apple to implement a feature like this, so I can quickly find my plane ticket receipts, for example.

Also, if you want to tweak your Mail settings, you can't do it in the Mail app; you have to visit the Settings app and scroll down to Mail.

Overall, Apple could have done much more with Mail. I was excited to re-open this app for the first time in years, but came away disappointed. I'll be sticking with Edison Email for now. I don't always want to respond to text messages right away. Sometimes, I want to treat them like emails, and mark them as "unread" so it's easier to come back to them later. There's still no way to do this in iOS 13.

3. The main new feature in Apple Maps — the "Look Around" feature, which rivals Google's Street View — is only in one city that I can find. I was so excited to open Apple Maps and try out the new Look Around feature, which is smoother and easier to use than Google's Street View, where you need to drop a little icon onto the area you want to see at street level.

Unfortunately, it's only available in three cities at the moment: San Francisco (of course), Las Vegas, and Honolulu. I find this incredibly disappointing, especially since Apple was emphasizing this feature so much in the lead-up to this release.

4. The Clock app still won't let you change the snooze function: It is set at 9 minutes. 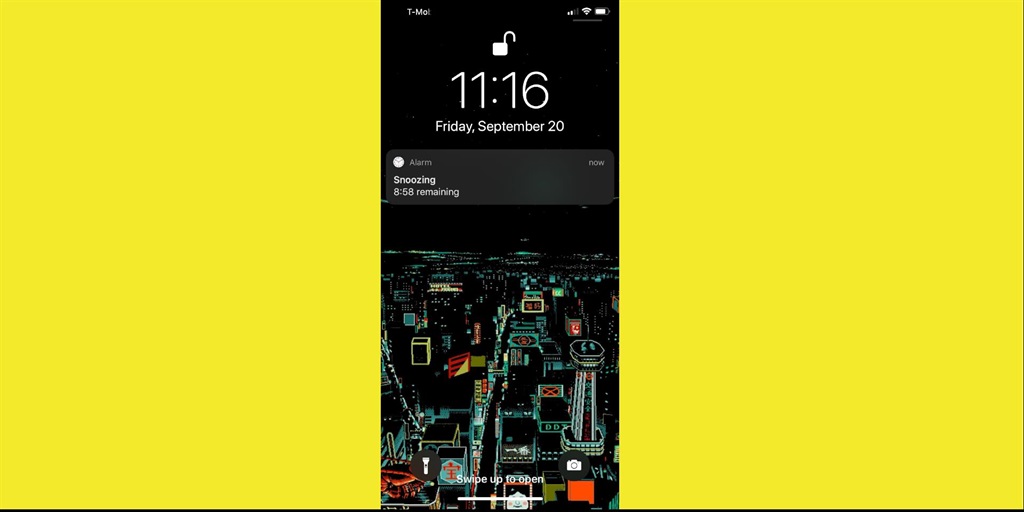 As long as Apple's Clock app has existed, the "Snooze" function will only go off every nine minutes. Not 10 minutes. Not eight minutes. Just nine minutes. And you can't tweak it at all, in case you want your snooze to be shorter like five minutes, or longer like 15 minutes.

It's apparently a tradition to have clocks set their snooze to nine minutes, which is why Apple does this, but I think it's a dumb tradition that has little merit.

5. There's no way to toggle Dark Mode in specific apps — changes can only be made system-wide. In iOS 13, you can have Light Mode, Dark Mode, or have Apple automatically transition the look of your phone based on the time of day.

Unfortunately, there's no way to have certain apps default to Light Mode or Dark Mode. For instance, I prefer Dark Mode across the entire system, but I want to keep Apple Maps in Light Mode for the sake of legibility. But there's currently no way to do this.

6. You can't delete the new Bedtime alarm in the Clock app. iOS 12 introduced a feature called Bedtime Mode, which let you know the ideal time to go to sleep to get the most rest before waking up the next day.

In iOS 13, Bedtime Mode is still its own tab, but there's a new Bedtime Alarm in your Alarms tab that you simply can't delete.

As someone who tried Bedtime Mode last year, and didn't like it, being unable to remove this feature from my Alarms tab is going to drive my OCD off the charts.

7. I don't like how you make new reminders in the overhauled Reminders app. In the old version of Reminders, adding a new reminder was as simple as writing some text and then choosing the day and time to be reminded.

In iOS 13, where Reminders has been completely overhauled, the day and time are now separate. And when you click "Remind me on a day," it won't tell you which day is "Today" or "Tomorrow," like it did in iOS 12. Now, you need to know, off-hand, the specific date.

If you want to see which days are "Today" or "Tomorrow," you need to toggle the option below, which says "Remind me at a time."

It's a small change, but it's now one extra step to see which day and time you want to be reminded, and I really liked being able to immediately know if a reminder was for "Today" or "Tomorrow" instead of needing to know the date.

There are a bunch of other letdowns in iOS 13. Apple's Calendar app didn't change at all. The Siri Shortcuts app still feels totally unnecessary, and it's puzzling to me why Apple made it a default in iOS 13 instead of giving people the option to download it from the App Store.

Perhaps the most disappointing aspect of this is that Apple likely won't change any of these features until iOS 14, given how the company seems to save any significant software changes for its annual update.