The iPhone has gotten boring. Here are 7 reasons to get excited about Apple’s rumoured smart glasses instead. We're about one month away from Apple's next iPhone, presumably called the iPhone 11.

In short, the iPhone has gotten boring. But that doesn't mean Apple isn't cooking up something vastly more exciting.

According to rumours and reports dating back to 2015, Apple has assembled a massive team to design and build a pair of smart glasses, capable of augmented reality (AR) experiences - where you can see virtual or digital images laid on top of the real world. Apple has been investing in AR over the last several years: In 2017, it announced a toolset for app developers called ARKit, and Apple has continued building on that framework since then.

We've heard a lot about Apple's rumoured smart glasses - like how it will run on a new "reality operating system" called "rOS," how it will be powered by Apple's A-series chips and leverage the computing and networking of the iPhone to keep the glasses lightweight - but what does this all mean? And why should you care?

Here are 7 reasons why you should be super excited about the potential of Apple Glasses.

1. Almost everyone wears glasses at least part of the time, for one reason or another. What if you could have one pair of glasses that could do it all?

At its most basic level, a pair of Apple Glasses should be able to do what normal glasses can do: improve your vision in certain conditions. It's like how the Apple Watch also needed the baseline function of time-telling.

I don't wear prescription glasses, but I do wear glasses when it's sunny out. But imagine having just one pair of glasses that could be sunglasses, and your normal glasses, and do a bunch of other futuristic stuff only a pair of Apple smart-glasses could do?

Imagine having a pair of glasses that could tune themselves based on your visual needs. I have no idea if this is even possible - given how corrective lenses are a combination of several different factors that involve different lens types, shapes, and strengths - but it would be incredibly cool if Apple's combination of glass and camera technologies could somehow combine to help you calibrate what you see through the lenses until everything is to your liking.

If Apple Glasses can be normal glasses, or sunglasses, or smart glasses whenever you need them, I'm not sure if I'd ever take them off (and I don't need corrective lenses).

2. Augmented reality would be perfect for a pair of glasses. Imagine being able to learn about your environment just by looking at it.

Imagine stepping out into Times Square in New York City. It's overwhelming, with all of the lights and sounds. What if your smart glasses could show you information about everything around you? Google is already developing this idea through its Lens technology, but it would be great in a pair of Apple Glasses, too.

You could see virtual signs pointing to each building, describing what you're looking at. You could see all the major landmarks around you, like Rockefeller Center or Bryant Park, and know immediately exactly how far away you are from them.

What if you could even filter by category? Maybe you just want to see all of the restaurants around you, or all of the entertainment spots.

3. Apple is already hosting augmented-reality tours in major cities like San Francisco and New York City, which gives a preview of how the Glasses could work. Apple recently launched a new program called AR[T], where the company hosts guided walking tours through major US cities using augmented reality. People are given headphones and an iPhone, and at various points along the walking tour virtual art will appear through the display of your iPhone.

It's kind of like "Pokémon Go," where virtual creatures can appear all around the city depending where you walk - but for artwork.

So while AR glasses could help you learn about your environment, it could also help the local area come alive in new and exciting ways. Perhaps Apple will make permanent AR art tours in certain cities as a way to entice Apple Glasses users to explore their surroundings (and maybe Glasses wearers will get badges for finding virtual installations, in the same way Watch owners get badges for completing activities).

4. The killer app for a pair of Apple Glasses could be virtual maps for navigation and directions. Remember "Crazy Taxi"? In that popular arcade game, you'd have to drive around town, hailing rides and dropping off passengers, to earn as much money as possible within a time limit.

The most memorable part of that game, however, was that big green arrow at the top of the screen that would tell you where to drive, or turn.

Imagine seeing the equivalent of the big green arrow in real life. Let's say you're visiting a city for the first time. You step out of the subway, but you have no idea how to get to your hotel. Since Apple's glasses are rumoured to support Siri, maybe you just press a button on your glasses and ask for directions to the hotel. Suddenly, a virtual blue line appears that only you can see: It shows you where exactly you need to walk and turn, so you don't need to take out your phone every other minute and check the directions. Maybe your glasses show more pieces of information, like estimated time of arrival.

5. Of course, Apple Glasses would have great potential for new and immersive gaming experiences. 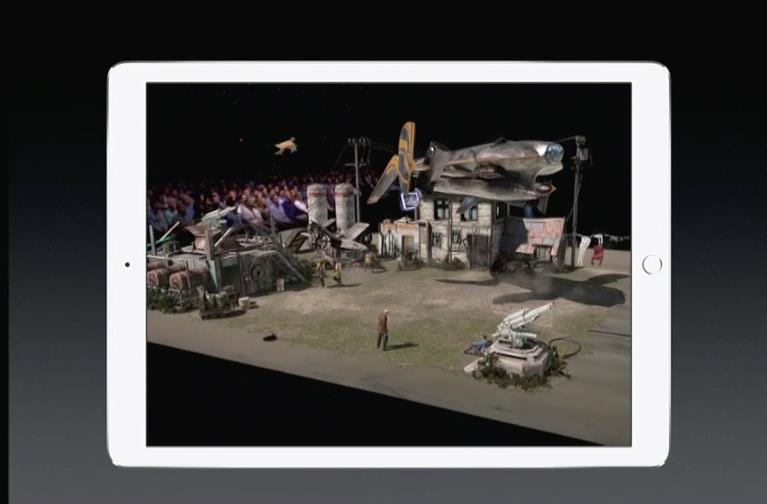 At Apple's various events over the last several years, the company has been pushing AR as a new way to play games with each other.

Imagine a virtual game board and a bunch of virtual game pieces only you and the other players can see: The entire game can be animated, and come alive in new and unexpected ways. More importantly, there's no clean up!

Being able to see virtual elements that other people can't see has a lot of fun potential applications.

6. What if Apple's Glasses could actually improve our vision? It would be a huge achievement if Apple can make Glasses that can be sunglasses, and/or corrective lenses. But what if Apple's Glasses could improve human vision even further?

Perhaps Apple's Glasses could use clever camera tricks to help us see better at night. Would you be interested in a pair of glasses that could also be night-vision goggles?

What about infrared? What if Apple's Glasses can help us detect heat signatures?

There is a lot of potential for a pair of smart glasses, even if these sorts of out-there features aren't immediately available in a first-generation model.

7. Given the increasing importance of photography, imagine how powerful it would be to film video or take pictures from a first-person perspective. For years, Snap's Spectacles have entertained the idea of letting people see the real world through others' eyes. Those camera-mounted glasses shoot video from a first-person perspective, which is really cool; the issue is that's all they really do. They're sunglasses that can record video, which is neat and all, but the latest version costs $380 and you still need to manually transfer everything you record to Snapchat before sharing it anywhere else - which feels a bit limited for a high-end device.

Read more: Snap has a new, much more expensive set of Spectacles coming this November for $380

Still, first-person photography is a powerful idea worth exploring in a rival product like Apple Glasses.

Apple has been perfecting its smartphone cameras over the years; this year, the iPhone 11 is expected to have a new triple-camera system on its back for improved depth sensing and, you guessed it, augmented reality. It's entirely possible that Apple has been honing its photography skills through the phone as it prepares for the ultimate test of photography: using cameras to capture what you see, from your perspective.