Apple's stock got a nice boost on Tuesday after the company posted better-than-expected results for its fiscal second quarter.

Of course, it's worth keeping in mind that Apple didn't have a very high bar to clear. Wall Street expecations were low, as the company faces slowing demand for its main money maker, the iPhone. While Apple's revenue "beat" expectations, its overall business is shrinking.

Here's a closer look at how the various parts of Apple's business empire - from iPhones sales to its R&D budget - fared in the first three months of 2019.

Apple's total revenue did something that would once have seemed inconceivable: it shrunk. The $58 billion in fiscal Q2 revenue was below the $61.1 billion revenue that Apple generated in the year-ago period.

It was the second consecutive quarter in which Apple's revenue has shrunk on a year-over-year basis. The cause of Apple's revenue decline is the iPhone.

Every segment in Apple's business, from Macs to Services, were stable or grew during fiscal Q2; even the long-troubled iPad business managed to grow revenue.

But iPhone sales took a big tumble, coming in $7 billion below where they were at this time last year.

That's a problem because Apple's bread and butter is the iPhone. The blue segment of the bars on the chart represent Apple's iPhone sales. As you can see, it's the biggest part of the chart, comprising the majority of Apple's business.

iPhone's revenue contribution has fluctuated over the years, but it's never dipped below 50% of total revenue since at least 2013. As Apple seeks to diversify its business, the iPhone's percentage of the company's total revenue will be an important metric to watch.

Apple wants its Services business to become its next growth story. 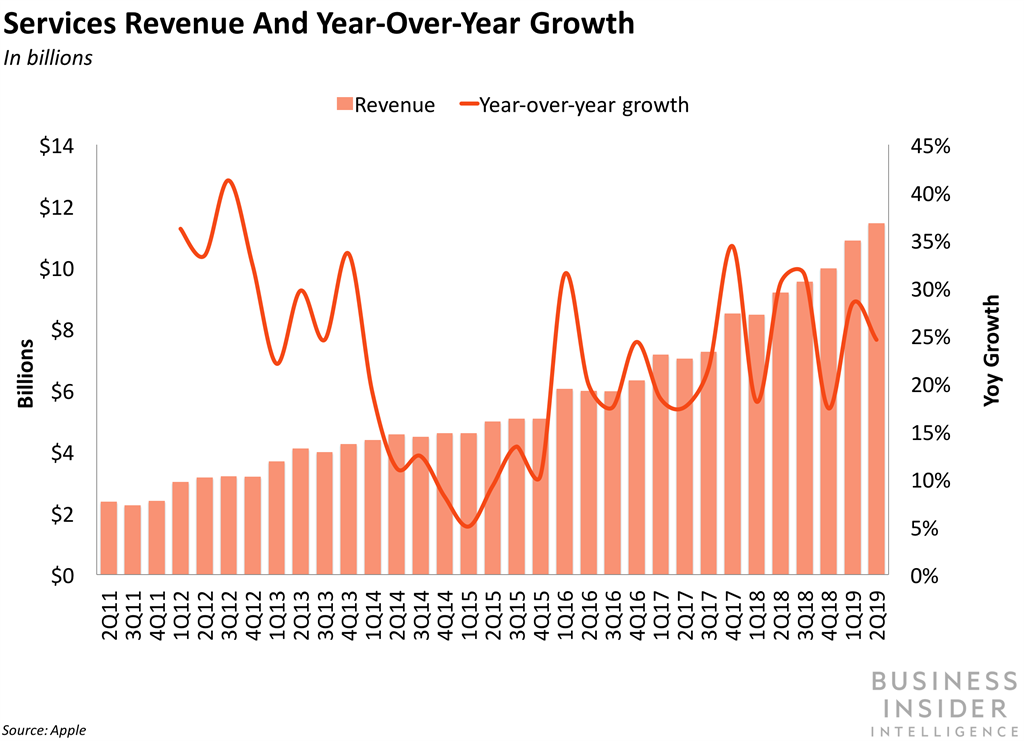 Apple is betting that the future of its business relies on capturing recurring revenue from a vast assortment of such services, used by owners of its 1.4 billion devices. There is some skepticism on Wall Street that the Services business will ever be able to offset the decline in the iPhone business, but Apple showed some progress in fiscal Q2: Services revenue increased 16% year-over-year to $11.5 billion.

Here's how Apple's various product lines performed during the quarter. China continues to be a weak spot. Apple's sales in the Americas held steady in fiscal Q2, but its performance in China continued to struggle.

The company's revenue in the China region, which includes Hong Kong and Taiwan, declined 22% year-over-year. That's actually an improvement from fiscal Q1, when China sales declined 27%.

"We certainly feel a lot better than we did 90 days ago," about China, Apple CEO Tim Cook said on the Q2 earnings call.

Apple's spending on research and development continues to increase. Apple has built its business on innovation. As the market for smarpthones becomes saturated, and consumers take longer to upgrade to new phones, Apple needs to come up with a new hit product. The best way to do that is through R&D.

Apple kept increasing R&D spending even as its revenue was shrinking. Apple's R&D budget continues to grow as a percentage of the company's overall revenue. The question is whether Apple is getting enough bang for its buck from all that R&D spending.

As Business Insider's Troy Wolverton has written, Apple doesn't have as much to show for all this spending as one might think.

The stage is set for Apple to pull off another remarkable comeback or a spectacular failure.