In January, former Apple engineer Bob Burrough uploaded a video to his YouTube channel to show off a new idea he has for a smartphone interface.

Burrough's "Project Erasmus" is a user-interface (UI) implementation that uses the lighting in your immediate environment to light, shade, and reflect on the software elements in the device. The result is an incredible, immersive visual effect that would make you want to use your phone even more (as if that's possible). When he moves the phone around in the air, the buttons and elements on the screen react to the lighting of the room he's in, complete with shading and highlights. "It looks like the user-interface elements are physical objects that reside just beneath the surface of the screen, like you could reach in and touch them," Burrough said in the video.

To make it work, Burrough attached to the top of his phone an Olloclip fish-eye-lens camera, which captures a wide-angle shot of the environment. The software projects that environment map into a scene, which is used to construct lighting and reflections that affect the UI elements on the device.

In the video, Burrough walks through different rooms in his house to demonstrate how lighting can change the interface. When Burrough walks into a dark room, or is covered by shadow, the device and the UI are also both in the shadow, which means there are no lighting effects on the phone. The UI elements, like the buttons up top and the shading on the square toward the bottom, completely disappear. Burrough said what happens to the user interface in the dark is completely up to the programmer, but his design allows for many interesting variations. He said you could, for example, create a backlight effect for the UI elements when your device is in a dark room, like how Mac keyboards can light up in the dark. As soon as Burrough walks out of the shadows, the interface begins to react to the light. 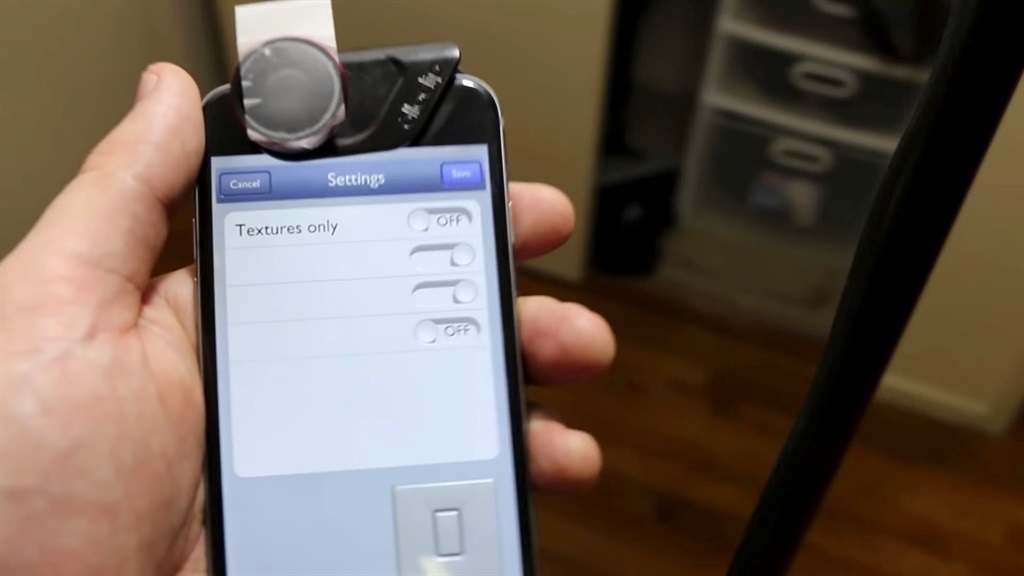 In brighter scenes, the UI takes on the shadows and highlights from the lighting in the room. When you move around, the shadows change, and the highlights come from the other direction. It creates a very nifty 3D effect. Burrough's concept, which he said "provides an unprecedented level of immersion," is something we would love to see in a real smartphone. One of everyone's favorite features in iOS 7 was the parallax effect, a simple visual tweak that creates an illusion of depth on your phone. It has no real function besides looking cool. Burrough's idea, if implemented on a phone correctly, could produce a similar "wow" effect among customers.

Burrough's concept is worth seeing in action. Check out his full video below.