Most of what happens inside Apple Park, the iPhone company's stunning new headquarters, is top secret.

But Apple CEO Tim Cook recently disclosed one new detail about the work environment: everyone gets a standing desk. "We have given all of our employees, 100%, standing desks. If you can stand for a while, then sit, and so on and so forth, it’s much better for your lifestyle," Cook said in a recent interview with the Carlyle Group's David Rubenstein published on Wednesday.

He then encouraged the billionaire financier to stand with him — just like a prominent feature on the Apple Watch.

Cook has previously cited doctors who say that "sitting is the new cancer".

"We have a lot of people using the Apple Watch at Apple, and ten minutes before the hour, suddenly they all get up and move. It took a little to get used to, but it’s great," he said at a Goldman Sachs conference in 2015.

The ability to use a standing desk is only one of a slew of perks available to lucky Apple employees at the company's new headquarters, which was rumoured to cost over $5 billion to construct.

Apple Park is built to blur the lines between the largely glass "spaceship," or "ring" building, and the carefully landscaped campus outside.

That campus is full of fruit trees and the on-campus "Caffe Macs" cafeterias actually use those fruits in its lunches and dinners. There's also a massive gym and a shuttle service to take workers to satellite offices and the company's old headquarters, which is a 10-minute drive away. 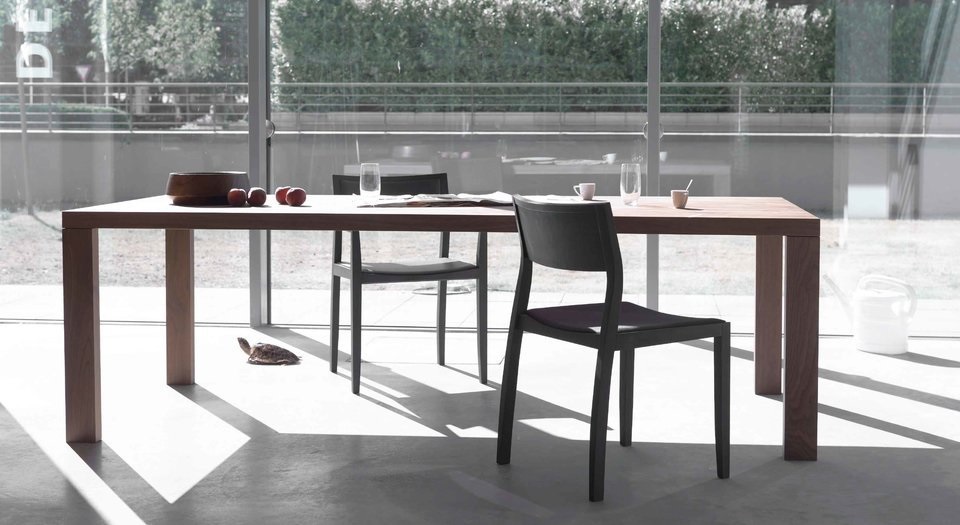 Apple's table is identical to this one, only twice as long.
Arco

That's not even counting the furniture inside Apple Park, which has been carefully hand-selected. Here are some of the pieces we know about: In addition to a standing desk, workers get desk chairs made by Vitra, which cost $1,200 (almost R16,000). Common areas and cafes are dotted with chairs designed by Nauto Fukasawa that cost $2,500. Many tables are 5m-oak slabs, which are custom as well.

Apple didn't respond to a question from Business Insider about the specific model of standing desk its employees use. Interior photos published in the Wall Street Journal don't depict any standing desks.

One reason why a company would invest so much in a new building is to help it recruit highly-paid software developers and tech workers, who have other options for employment, but who might want to work in a beautiful architectural landmark.

Cook and Apple seem happy with Apple Park. "Steve [Jobs] had the vision that the workplace should facilitate people working together … having these common areas that people could work together and run into each other without planning on doing it … and that the level of ideas and creativity and innovation that would come out of that would be phenomenal," Cook said in the interview with Rubenstein. "And we're seeing that."