On paper, "Apex Legends" sounds a lot like "Fortnite."

It's a free-to-play shooter centered around a Battle Royale mode! It's available on several gaming platforms! It's full of colorful loot!

In reality, "Apex Legends" is a very different game in the same genre as "Fortnite."

As the latest entry in the increasingly crowded battle-royal genre, "Apex Legends" advances the formula in a variety of brilliant twists. Allow me to count the ways:

1. It's a class-based, team-based Battle Royale that doesn't require a headset. At launch, there is no way to play "Apex Legends" as a single player online. There is no "duos" mode either. The only way to play the game is in squads of three players, with 60 total players filling 20 squads.

Given this, "Apex Legends" is very specifically made with communication in mind. Your squad is much, much more likely to win if you're talking to each other.

But don't worry: That doesn't mean you have to actually talk to strangers.

A brilliant, robust system exists in-game for "spotting" various things. See an enemy? Tap the right bumper on your gamepad, and your character will call out those enemies and even mark their last movement for your teammates.

Smarter still, that system is contextual. If you're looking at a level-three helmet and "spot" it, your character shouts out, "Level-three helmet here!" and marks it for your teammates. It's this system that enables teammates to communicate a wealth of information without having to literally speak to strangers. The concept of reviving teammates in Battle Royale games isn't new, and it isn't new to online multiplayer shooters.

What is new, however, is the concept of respawning completely dead teammates - "Apex Legends" enables just that.

As is now standard in squad-based shooters, players on the losing end of a fight are "downed" initially. Thus begins a timer that leads to that player eventually dying, called the "bleeding out" process. If you get to your squad mate before they bleed out, you can revive them - pretty standard.

But if they die, a new timer begins. You now have about one minute to retrieve your squad mate's banner, which was left on their corpse. If you retrieve it safely, there are respawn stations where you can outright respawn a fallen teammate.

This may sound small, but it fundamentally changes the nature of Battle Royale games.

If you encounter a player and kill them, but don't wipe out their whole squad, you risk allowing that player to be revived. Similarly, if you're killed early in the match, you shouldn't quit out of the game and move on - your squad mates are just as likely to revive you.

In so many words, it adds another layer of depth to the Battle Royale formula.

Anecdotally, the first game I won was a game where I was respawned by a savvy teammate who carefully got away at the right moment.

3. Dropping as a group solves a major problem with Battle Royale games. Too often, when playing games such as "Fortnite" or "PlayerUnknown's Battlegrounds" in squad-based modes, everyone barrels to the island and does their own thing.

Right off the bat, "Apex Legends" strongly encourages teams to stick together by forcing them to drop from the airship together. One of the three players is appointed the "jumpmaster" (really!), and that person gets to decide where the trio of players drops on the map. You're able to split off mid-air or jump earlier if you prefer, but the message is clear: You'll do better together, so why not stay together?

As a bonus, you get to call your friends funny nicknames that involve the amazing nonword "jumpmaster". In "Fortnite," every character you play as has the same abilities. It's a third-person shooter with building mechanics, and every avatar - visuals aside - is identical.

The same can be said for "PlayerUnknown's Battlegrounds" and the battle-royal mode in "Call of Duty: Black Ops 4."

But in "Apex Legends," each player has unique abilities. There are various "classes" of characters - soldiers, tanks, healers, etc. - and various specialties within each class. In this way, "Apex Legends" is more similar to "Overwatch" - or even "Super Smash Bros. Ultimate" - than its direct competition.

And blending those characters into a team made up of complementary players is part of the delight of "Apex Legends." Better yet: The game's developer, Respawn Entertainment, is promising additional heroes in the near future.

So, what are these powers? One character is able to conjure a healing drone that can heal multiple teammates at once. Another character has a grappling hook, and another has noxious-gas containers that warn of impending enemies. Since it's still early days for "Apex Legends," many of the best ways to use various abilities are still shaking out.

5. The focus is on squad play and nothing else, and that's fine. 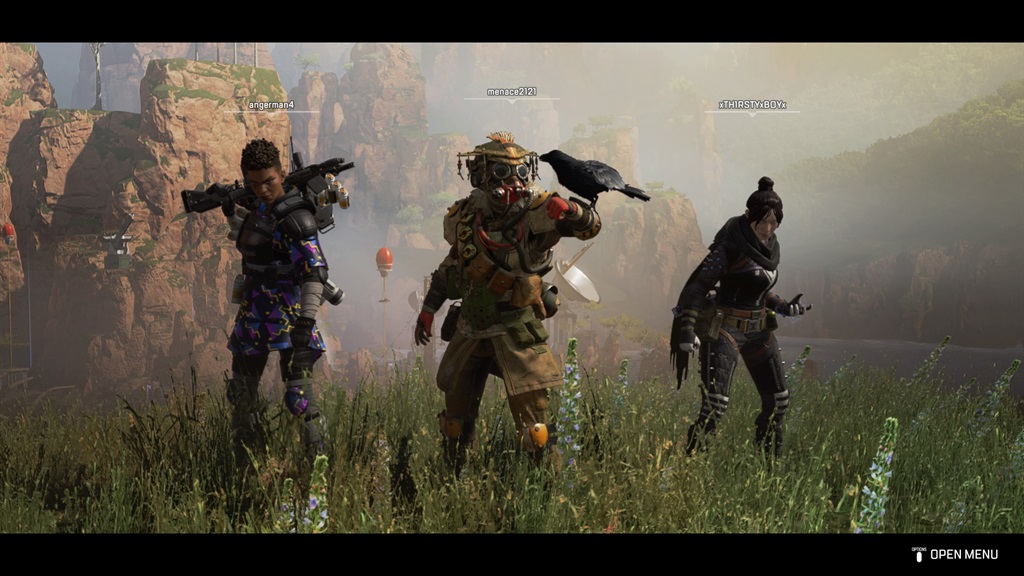 Could "Apex Legends" use a solo mode? A duos mode? Sure, those would be fine.

But given how much of the game feels purpose-built for squad-based gameplay, perhaps it doesn't need either mode just yet.

More specifically, the game's use of hero characters with unique abilities makes it a difficult game to simply allow solo play. Maybe one hero is the best for general use, and all players gravitate toward that class - it would be a significantly less exciting game if that were the case.

6. The feel of shooting in 'Apex Legends' is second to none. The team behind "Apex Legends" has a serious pedigree behind it, having created the "Call of Duty" series and the "Titanfall" series.

It's no surprise at all that the shooting in "Apex Legends" feels so good - it's from developers who more or less set the standard in video-game shooting.

The shooting looks, feels, and sounds about as good as it does in the best shooting games, from the latest "Call of Duty" to "Destiny 2."

This may sound obvious but, in the most popular Battle Royale games, the shooting is pretty terrible. Both "PlayerUnknown's Battlegrounds" and "Fortnite" have lackluster shooting mechanics. The only great Battle Royale shooter is the "Blackout" mode in "Call of Duty: Black Ops 4." Like "Fortnite" and other Battle Royale games, a "loot" system is core to the experience.

The very first thing you do in any battle-royal game is gather loot - weapons, armor, healing kits, and whatever else - as a means of survival and, hopefully, success.

"Apex Legends" is no different in this regard, but it smartly streamlines the process. Not only can you tell what's what simply by looking at it, but contextual pop-ups as you hover over items will directly tell you if you've already got something better.

No comparing what's in your backpack with what's on the ground, or trying to figure out if your gun attachments are as good as the ones you just found: "Apex Legends" just straight up says what's what. It's exactly the type of subtle detail that "Apex Legends" so smartly nails across the board.

8. Just getting around is fun. When describing most shooters, the word "runner" might be more accurate. That's the vast majority of what players do in every online shooter: run.

It's a sad truth that much of the time spent in games such as "Fortnite," "Call of Duty," "Battlefield," and "Destiny" is actually spent running from place to place.

Yet, despite this truth, many shooters do nothing to make that process any more entertaining. One of the best first-person shooters ever made, "Starsiege: Tribes," is beloved for doing exactly that: It added jetpacks and a mechanic known as "skiing," which made the simple act of traversal much, much more entertaining.

"Apex Legends" has its own version of this.

If you see a downhill section coming up ahead, try running and sliding into it - and watch as your character goes flying downhill with surprisingly frictionless speed. A carefully timed leap at the end of that slide will send your character flying through the air.

Or perhaps you see a zip line? Even if it's going against gravity, it'll still magically whisk you at full speed toward the endpoint.

It's these little nods to traversal that make playing "Apex Legends" much more fun than most online shooters, let alone most Battle Royale games. In "Call of Duty: Black Ops 4," the Blackout mode is dreadfully self-serious. A dour man with a garbled British accents growls, "Blackout!" at the beginning of each round. The generic military aesthetic of "Call of Duty" is omnipresent on the pastiche island of former "Call of Duty" multiplayer maps that makes up its Battle Royale map.

In "PlayerUnknown's Battlegrounds," a dreary, hopeless landscape of pastels depicts the ruins of a generic ex-Soviet island.

And in "Fortnite," a neon-tinged cartoon world pulled straight from the Gushers ad department is punctuated by smiling loot llamas and bizarre, physics-defying structures. It's unique and pretty, but also extremely kid-friendly - full of rounded edges and the occasional whiff of sponsored content.

"Apex Legends" looks like a Battle Royale game made with adults in mind - adults who understand why an area of the map is named "Thunder Dome," and appreciate the cheeky announcements that sound an awful lot like the cheerful announcements set against horrific violence in movies such as "The Running Man" and "Battle Royale" (yes, there was a movie named "Battle Royale" that inspired all of these games!).

That distinct aesthetic is also clear in the massive banners around every corner (seen above) showing players which team is on top - as if to say, "These are the ones to go after!"

Related Links
Spar has launched a SONA drinking game - if 'expropriation' is mentioned, everyone must drink
More than 10 million 'Fortnite' players logged on to watch a 10-minute concert
Nintendo just revealed its top 10 best-selling Nintendo Switch games, and there's a surprise twist
Next on Business Insider
300 employees at TikTok and parent company ByteDance worked in Chinese state media, LinkedIn analysis