The US diplomat whose wife is a suspect in a fatal UK car crash and fled the country may not have had full diplomatic immunity, legal expert says

Harry Dunn, the British teenager who was killed near RAF Croughton in Northamptonshire in August.
Sky News

Anne Sacoolas, the US diplomat's wife who claimed immunity to leave the UK after being involved in a fatal car crash, may not have had the legal right to leave the UK, legal experts say.

Sacoolas is suspected of hitting 19-year-old Harry Dunn with her car near RAF Croughton, a Royal Air Force base used by the US Air Force for its communications, in late August. RAF Croughton, the British Air Force base used by the US Air Force in the East Midlands in England.
Google Maps

Dunn, 19, had been riding his motorbike while Sacoolas was driving her Volvo XC90 luxury SUV on the wrong side of the road, Sky News reported. He died later at a local hospital, The Daily Beast and The Telegraph reported.

She had been in the country for two weeks at the time, The Daily Beast reported. The US and UK drive on different sides of the road.

Northamptonshire Police has not yet responded to Insider's request for confirmation regarding details of the crash and Dunn's death, and how long Anne Sacoolas has been in the UK at the time.

The mother of three is married to US diplomat Jonathan Sacoolas who works at a US spy base.@Skynews believes an arrangement between the UK and US granted the family diplomatic immunity because of Jonathan Sacoolasâ€™ nature of work. pic.twitter.com/NC7yVSmoN5 — Sky News (@SkyNews) October 7, 2019

Sacolas initially complied with police shortly after the collision and said she had no plans to leave the UK in the near future, Northamptonshire Police said last week. However, she and her family have since returned home to the US after claiming diplomatic immunity.

Sacoolas and her family - including three children - were privately flown out of a military air base in the UK shortly after the crash, The Telegraph reported. Someone on the American base had advised the family to return home to the US, Sky News reported.

According to the 1961 Vienna Convention, people registered as diplomats and their families are legally entitled to claim immunity from being tried in their host country as long as they are not nationals there as well.

However, her husband - named by UK and US media as Jonathan Sacoolas - does not appear in the UK's official list of diplomats, inviting speculation that the family didn't have the right to claim diplomatic immunity to leave. 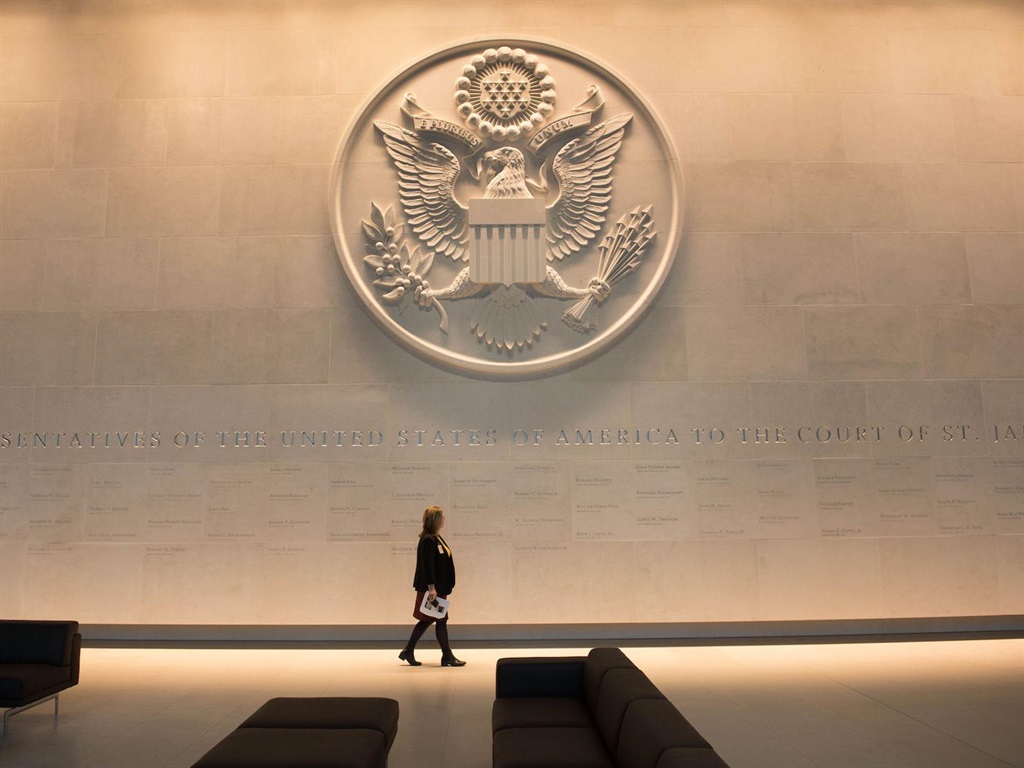 A lobby in the US Embassy in London.
Getty Images

Mark Stephens, a British lawyer specialising in constitutional and diplomatic law, said this means the UK Foreign and Commonwealth Office and Northamptonshire Police may not have had the right to let the family leave.

Referring to the Vienna Convention, Stephens told Sky News: "That treaty though doesn't bind Northamptonshire Police and it doesn't bind the family of this poor boy who was deceased, and as a consequence they can apply for her extradition to come back to face manslaughter charges."

Sources close to the UK Foreign and Commonwealth Office and the prime minister's office however, told Insider that Jonathan Sacoolas had the right to diplomatic immunity.

The prime ministerial source also told Insider that the Anne and Jonathan Sacoolas don't appear on the diplomatic list because it only contains the names of people based in missions in London.

It does not encompass all the names of people in the UK with the right to diplomatic immunity, the source added.

The FCO has not responded to Insider's request for comment on Stephens' remarks.

Northamptonshire Police has not yet responded to Insider's request for comment on whether Anne Sacoolas had the right to leave, and their next steps in the case.

Dunn's death and Sacoolas' departure have since been escalated to the highest echelons of US and UK government. British Prime Minister Boris Johnson on Monday publicly urged Sacoolas to return to the UK to face questioning.

"If we can't resolve it, then of course I will be raising it myself, personally, with the White House," Johnson said.

Dunn's parents have also appealed for Sacoolas to return to the UK to face questioning. They have set up a GoFundMe campaign to raise £10,000 (R185,000) and vowed to set up a legal campaign to prevent people from claiming diplomatic immunity in such circumstances.

Stephens, the lawyer, told the BBC "Breakfast" program on Wednesday that Dunn's parents should travel to the US to sue Sacoolas.

The British government "should actually be funding the family" to sue Sacoolas in the US "so they can get the explanation they so richly deserve," he told Sky News.

"I cannot believe how badly the Dunn family have been treated," Stephens tweeted. "Lacking humanity and common decency."