A fossil specimen of Daihua sanqiong, which some scientists think is an ancestor of the comb jelly.
Yang Zhao

At first glance this fossilised sea creature looks more like the Sarlacc from Star Wars' "Return of the Jedi" than any animal on Earth today.

According to a recent study, the Daihuasanqiong - which lived 518 million years ago and was first discovered about a decade ago in southern China's Yunnan Province - had 18 long tentacles that branched away from its gaping maw.

Paleobiologist Jakob Vinther from University of Bristol in the UK saw the fossil during a visit Yunnan University's paleobiology lab.

"I was extremely lucky to notice the fossil, which gives an almost 3D view of what the animal looked like," Vinther, who co-authored the new study, told Business Insider via Skype as he held the fossil up to the camera.

About the size of a half-dollar, Daihuasanqiong's flower petal-like appendages were covered in large hairs called cilia that the animal likely used to bring in unsuspecting prey. According to the new study, those hairs may indicate that the sea monster is an ancestor of an equally creepy underwater denizen that still swims in the ocean today: the comb jelly.

Comb jellies are "gelatinous blobs" that have no skeleton, yet are equipped with cunning ways to hunt other animals, according to Vinther. They can entangle their prey with long, snaking tentacles, and are even known to swallow members of their own species. 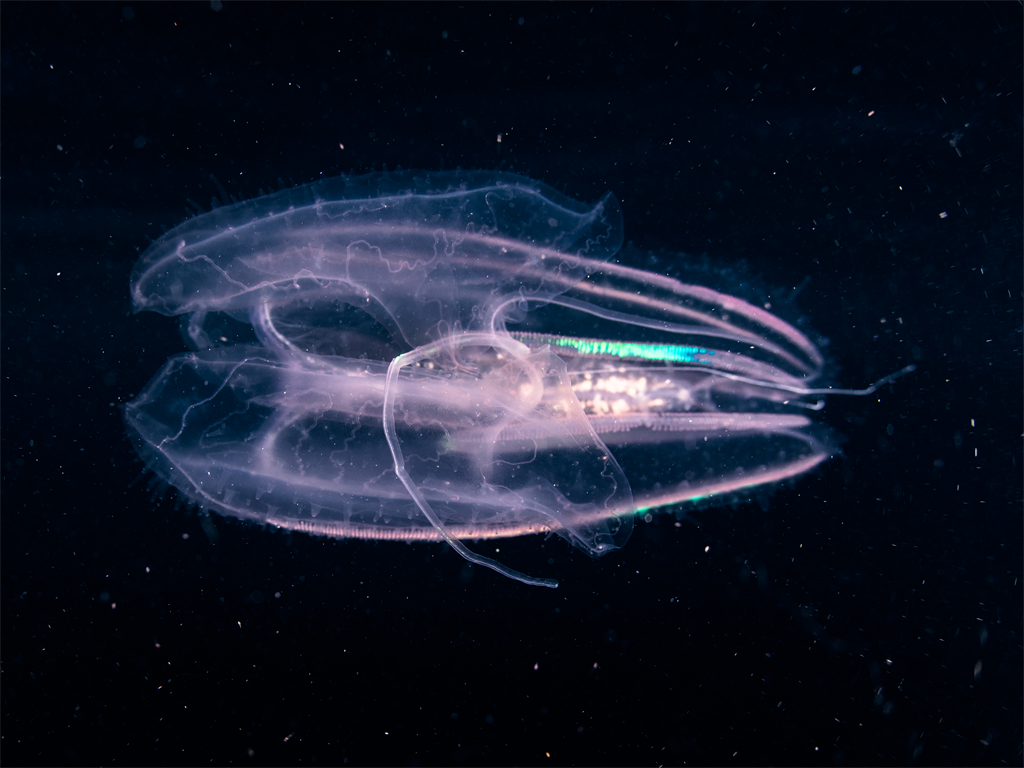 A comb jelly, or ctenophore, swims through the dark waters of the western Pacific Ocean.
VelvetFish/Getty

Comb jellies' place on the tree of life is often disputed among scientists. Previously, many thought comb jellies were one of the first animals to evolve on the planet.

But after Vinther saw the Daihuasanqiong specimen, he realised there were physical similarities between the cilia on the ancient animal and the comb-like rows of cilia on the modern comb jelly. These similarities suggest comb jellies might come from a long, strange line of ocean dwellers.

"We showed comb jellies originated from weird and wonderful ancestors," Vinther said. "Comb jellies are still bizarre as hell, but now we can explain it."

The secret's in the cilia

Typically, cilia are microscopic hair-like extensions that jut out from the surface of cells to help a cell sense its surroundings. But in the case of D.sanqiong, these cilia were large enough to fulfil different functions - they likely helped the animal move or catch its prey.

Vinther noted that only one other creature has been known to have large ciliary structures like the ones on D.sanqiong: "Comb jellies are the big cilia guys," he said.

Comb jellies, or ctenophores (ctenophore is Greek for "comb bearer"), have eight comb rows of fused cilia that swaddle their sides. The cilia undulate in synchrony to propel the animal forward through the water, sometimes reflecting sunlight to give the rows a rainbow-like appearance. "These cilia are up to 2 millimeters long, and the largest known cilia in any animal," Vinther said.

The fact that today's ctenophores and the flower-like D.sanqiong both had long cilia is a clue that modern-day comb jellies "evolved from something that sat on the sea floor with tentacles like sea anemones," Vinther said.

Where comb jellies came from

According to Vinther, if you were to put on scuba gear and dip into the ocean right now, you'd see a comb jelly. The animals have been around for at least 500 million years, according to the Smithsonian Institute, and are found in every ocean environment around the globe.

Vinther thinks that hundreds of millions of years ago, D.sanqiong's tentacles evolved into comb rows, and its mouth ballooned outward over time to become the main body sphere seen in comb jellies today. To him, that seems like the likeliest explanation of how a sedentary animal with a skeleton evolved into a free-swimming bone-less jelly.

But not all paleobiologists agree.

"It's hard to say whether this ancient creature is part of the lineage that produced comb jellies," Casey Dunn, a professor of ecology and evolutionary biology at Yale University, told Live Science. "I am highly skeptical of the conclusions they draw." Still, according to the study authors, their findings are strong evidence that comb jellies are related to corals, sea anemones, and jellyfish.

"Those [ancient] tentacles are the same tentacles that you see on corals and sea anemones," Vinther told Live Science.