From Alexa-powered smart glasses to a serious AirPods competitor: These are the 8 craziest and coolest new gadgets Amazon unveiled in an hours-long event on Wednesday

On Wednesday at Amazon's Seattle headquarters, the company unleashed a tidal wave of new products aimed directly at your home - and one of them is aimed right at your face!

The new glasses are Amazon's first foray into the world of smartglasses, and are part of a long list of new products and updates to the Echo line of devices that Amazon revealed on Wednesday. Amazon also showed off a new smart oven, wireless earphones that seem directly intended to compete with Apple's AirPods, and much, much more.

Here's the best of what Amazon just revealed at its big reveal event: First and foremost: No, these are not Amazon's version of Google's Glass or Snap's Spectacles.

Amazon's smart glasses have no camera and no display - they are "smart" only insofar as they have a built-in Alexa that you can speak with. Think of these more like the glasses version of the earpiece from the film "Her."

Echo Frames are part of the pair of items Amazon unveiled as experimental "Day 1" products, which Amazon describes as, "a new way for us to get new products out in limited volume, to customers, and to get real feedback - and if customers love them, we'll double down and build a lot more." If you haven't already guessed, the Echo Loop pictured above is the ring around her finger. See it now?

It's easy to miss, and that's because it's intentionally built to look like a normal-ish ring. The Loop uses two microphones, activated via a button built into the ring, and features a baby speaker.

What do you actually use the Loop for? It's a kind of paired device that alerts you of incoming calls/texts - as such it must be paired with a smartphone.

The Loop can be purchased via opt-in invitation for $100; that price goes up to $130 when the introductory period ends. For the same $100, Amazon is now offering the latest version of its long-running, nearly ubiquitous, Alexa-powered smart speaker: The Echo. This is the original speaker that introduced the world to Alexa and the concept of smart speakers into the mainstream, and it appears to be as good or better than ever before.

Amazon is promising better sound - on par with a previous edition of its premium Echo Plus line - and a customizable fabric exterior for the new Echo. It's available to pre-order starting today. 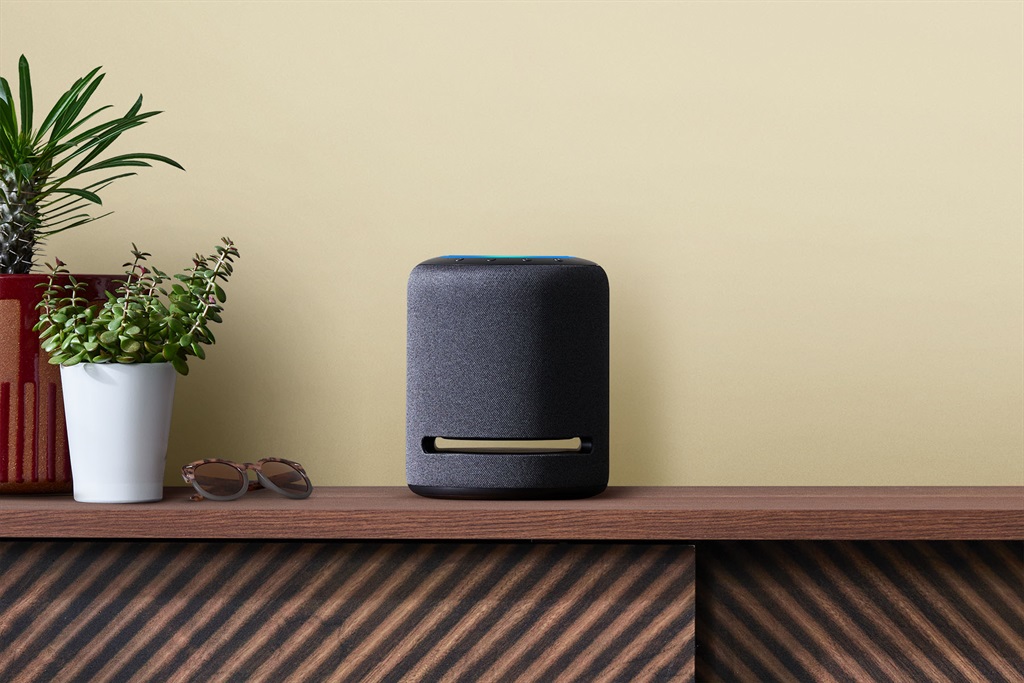 But a new entry-level Echo wasn't the only new smart speaker Amazon rolled out on Wednesday - there's also the Echo Studio, which appears to directly replace the previous line of Echo Plus devices.

The idea here is simple: The Echo Studio costs double the price of the standard Echo, but it's intentionally built with audio-focused buyers in mind.

Like similar high-end smart speakers from Apple and Google, the Echo Studio is able to "read your room" using the built-in microphones; the sound it produces is intentionally modeled around the room to which it's calibrated. Amazon's Echo Studio goes up for preorder today, and starts at $200. A long-rumored Amazon device was finally revealed on Wednesday: The Echo Buds.

Despite the ominous-sounding name, these are just wireless earphones along the lines of Apple's AirPods. One major advantage Amazon has over Apple, though, is price: The Echo Buds start at $130 compared to Apple's $160.

Another big plus: Amazon's Echo Buds function with any voice assistant your phone has, and will also add Alexa if you'd prefer. The Echo Buds are expected to start shipping in October.

6. Amazon Smart Oven: A microwave, convection oven, and air fryer — all in one! The Amazon Smart Oven is one step closer to the Jetsons-style food machines we've all been waiting for. The Alexa-powered device bills itself as a "microwave, convection oven, air fryer and food warmer."

Moreover, Amazon says it has built-in presets that automate some of the cooking process:

"Just ask Alexa to cook common foods using dozens of presets that have been carefully tested and tuned. Alexa will announce when to stir the food during cooking and let you know when it's finished." Not to be outdone by the many other home products unveiled on Wednesday, Amazon's Ring group announced its least expensive camera to date: The Ring Indoor Cam.

It's small - "you can mount it just about anywhere in the home," Amazon says - just like its price: $60. The Echo Glow isn't another Alexa-powered gadget. Instead, it's a new type of nightlight that pairs with Alexa.

"Customers will be able to ask Alexa for a flickering campfire light for playtime, a Sleep Timer that gradually dims as bedtime nears, or, coming soon, a dance party with music and lights," Amazon said of the Echo Glow. "They can also set Echo Glow to softly cascade through all the colors of the rainbow or light up with your favorite color."

The idea is that existing Echo owners with children - or anyone who enjoys totally sweet lights - will buy the $30 Echo Glow as a kind of add-on for the Echo speakers that already exist in your home. (Since they're intended for kids, they don't have any built-in microphones.)