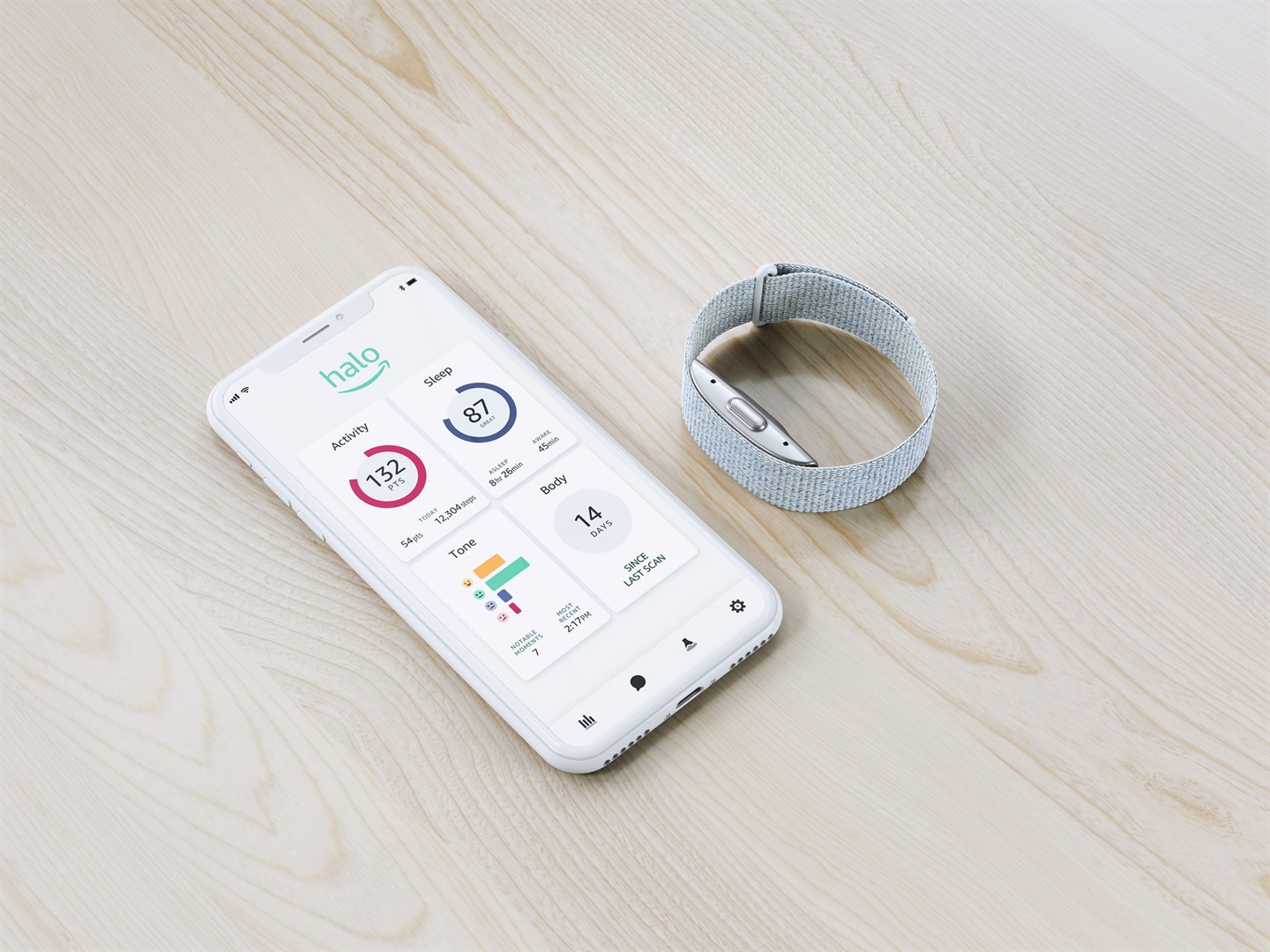 Amazon is making a big leap into the health space with the launch of Halo, a new app and wristband that the company says can detect emotion in your voice by analysing speech and calculate body fat percentage using just your smartphone's camera.

The Halo band will be launching in early access starting on Thursday, meaning those interested in trying the service will have to obtain an invite.

The launch marks the online retail giant's biggest push into health yet, coming after the firm launched a virtual health clinic for employees last September and said it's building labs to test its workers for Covid-19.

Amazon is joining a crowded space, competing with the likes of Apple, Samsung, and Google — the latter of which agreed to acquire digital health firm Fitbit last year — among many others. Apple is currently the leader when it comes to wearable technology according to research firm Canalys, which says the company accounted for 36.3% of global smartwatch shipments. Tim Cook, Apple's CEO, has even said he thinks Apple's greatest contribution to mankind will be about health, according to CNBC.

But Amazon is taking a different approach than these companies. Rather than focusing on the device itself, Amazon is positioning Halo as a comprehensive digital health service that leverages both your phone and its accompanying wristband. The company is also delving into metrics that go beyond basic fitness, activity, and sleep tracking, although its service does offer those measurements, too.

For example, Halo includes a feature that uses artificial intelligence and your smartphone's camera to take a 3-D body scan for calculating your body fat percentage. It also uses machine learning to make inferences about what the tone of your voice says about your mood and energy level during conversations through a new appropriately named capability called Tone.

Amazon is offering such services amid growing concerns about privacy and the size and influence of not just Amazon, but other similarly large technology companies. CEO Jeff Bezos recently testified alongside the CEOs from Apple, Google, and Facebook in a blockbuster antitrust hearing just last month. And last year, Amazon was embroiled in controversy over Alexa-related privacy concerns and how police departments are using Ring for surveillance.

Amazon says privacy was built into Halo from the ground up, and that data from the service will never be used for advertising or other purposes.

Here's a closer look at Amazon Halo and how it works.

The Halo Band itself is meant to be a minimalist activity and fitness tracker, not a smartwatch alternative. The Halo Band doesn't deliver notifications to your wrist, but it's packed with health-tracking sensors, like a temperature sensor, accelerometer, and a heart rate monitor. The band also comes with two built-in microphones, and there's a physical button for turning them on or off. Amazon says it should last for a whole week on a single charge.

The band itself is fairly basic because much of the interaction happens in the Halo app. The app is divided into a few main sections: Activity, Sleep, Body, and Tone. Activity, as its name implies, houses your activity data. Rather than just tracking calories or active minutes, Amazon's Halo app offers a points system.

Wearers earn points based on their activity, with more rigorous physical activities earning more points. And rather than setting a daily goal, Halo provides a weekly goal of 150 points. You'll also lose points if you remain sedentary for too long throughout the day.

Like many other fitness trackers, the Halo band also tracks sleep metrics such as time spent asleep and awake and stages of sleep. Since it has a temperature sensor, it can also monitor skin temperature while sleeping.

The app also includes a selection of labs, which are digital programs that help you progress toward certain wellness goals.

But one of Halo’s standout features is its ability to measure body fat percentage. A deep neural network that's been trained to understand how images of a person relate to the properties of their body — like fat and muscle — analyzes the data, according to Dr. Maulik Majmudar, Amazon's principal medical officer. Although it can't actually see fat, the neural network looks at areas where fat is commonly found, like the torso, thighs, and mid-back.

The app can also generate models that show how your body shape could change as your body fat percentage increases or decreases. Amazon says anyone should be able to take a body scan in the Halo app so long as they have room to stand between four and six feet (1.2 to 1.8 metres) away from their phone. The company also says users should wear tight, minimal clothing to get the best results.

The other hallmark capability is Halo’s ability to detect your mood based on the tone of your voice. If you've ever wondered whether you've come across as being agitated during that recent team meeting, Amazon's Tone feature should help, the company claims. Amazon Tone uses AI to analyze the positivity and energy in your voice to help you better understand how you sound to others, the company says.

The microphones on the Halo Band pick up your speech and analyze qualities like pitch, intensity, tempo, and rhythm to estimate your mood during the conversation. As shown in the image above, the app can provide a report estimating whether your mood was positive or negative throughout the day, and even highlights specific standout moments.

The goal of a feature like this, according to Majmudar, is to help customers reflect on how they sounded in recent conversations.

You must opt into the Tone feature in order for it to work by creating a voice profile. If you do choose to opt in, Amazon says Tone will run in the background and analyze short samples of speech throughout the day.

The band collects speech samples, processes them within the Halo app, and then automatically deletes those snippets, meaning they can't be played back even by the user.

The launch comes as there’s been mounting scrutiny over the ways in which large tech firms manage and use personal data. Amazon found itself in hot water last year after a report from Bloomberg revealed that Amazon contractors had access to accidental Alexa recordings, enabling them to sometimes listen in on intimate moments. The partnerships that Amazon's Ring video doorbell service has forged also drew scrutiny last year.

Amazon is far from being the only tech giant in the hot seat; concerns have also been mounting regarding how Facebook and Google use the personal data of their users. Facebook's Cambridge Analytica scandal from 2018 kicked off a new era of scrutiny for tech giants when it comes to how user data is protected, obtained, used, and managed.

That may all be enough to make critics of Amazon and "big tech" very wary about using products that analyze your body image and the sound of your voice.

Amazon, however, says it built Halo with privacy in mind. Body scan images are automatically deleted from Amazon's cloud after being processed, and such images are only stored locally on your device unless you specifically choose to save them in the cloud.

For Tone, Amazon says speech samples are processed locally on your phone and then deleted after they're analyzed. These speech samples are never sent to the cloud, and users can delete Tone results and their voice profile anytime.

It's also possible to turn the feature off entirely by switching off the band's microphones, and the wristband will display two blinking blue lights to indicate when it's analyzing your voice.

The company has also said Halo data will never be used for advertising purposes.

Overall, the launch is another signal that tech giants are continuing to push even more deeply into the world of health, even at a time when there may be more skepticism about the level at which these companies pervade our lives.

It's also another sign that health tech is evolving beyond physical fitness. Just before Amazon announced Halo and its Tone feature, Fitbit unveiled a new smartwatch that can measure the impact of stress on the body.