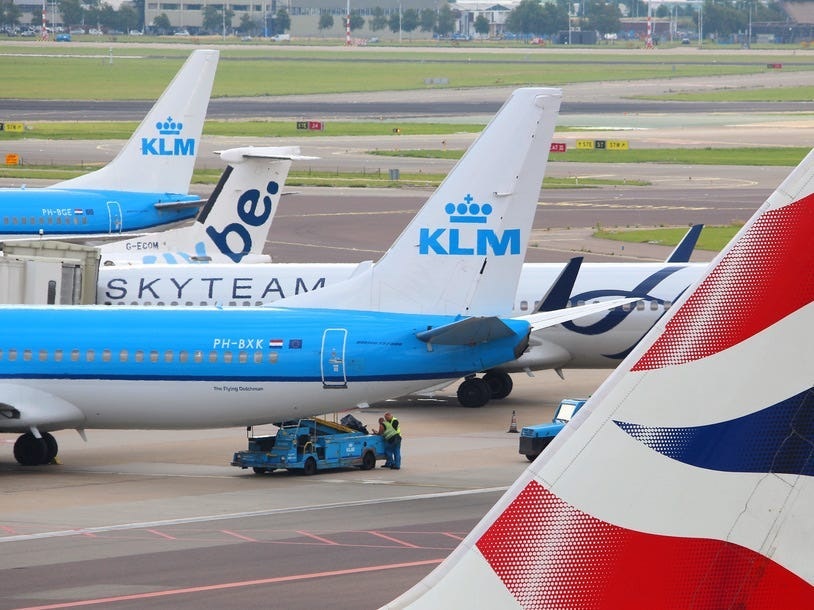 Tensions on the Russia-Ukraine border are rising despite diplomatic efforts to defuse the situation, and many global airlines are starting to cancel flights to Ukraine or avoid the country's airspace.

On Saturday, Dutch flag carrier KLM was the first major airline to announce it was suspending flights to Ukraine until further notice, saying the decision "follows the adjusted travel advice to code red and an extensive safety analysis." German flag carrier Lufthansa also said it was considering a suspension, according to BBC News.

With the looming threat of war, a handful of other international carriers have also canceled flights or changed their routing to avoid Ukrainian airspace.

Specifically, Qatar Airways canceled its morning flight from Doha to Ukraine's capital city of Kyiv on Monday, according to FlightRader24. However, it operated its afternoon flight but changed the aircraft from an Airbus A320 narrowbody plane to a much larger Boeing 777 widebody jet.

Meanwhile, Reuters reported on Monday that British Airways planes are avoiding Ukrainian airspace on flights between Europe and Asia. Moreover, Ukrainian low-cost carrier SkyUp was diverted to Moldova on Sunday after its Irish aircraft lessor insisted the plane not fly to its initial destination of Kyiv, ABC News reported.

Amid the rising threat of invasion, many aircraft insurance companies are withdrawing their coverage for planes flying in Ukraine. According to Reuters, Ukraine International Airlines, the nation's flag carrier, said its insurers will not cover its aircraft and requested five of the company's Boeing 737-800 jets to be flown to Spain for storage.

Despite the travel warning, Ukraine has vowed to keep its airspace open, having allocated about $590 million to offer to airlines continuing flights through its airspace, according to BBC News.

Henry Harteveldt, travel analyst and president of Atmosphere Research Group, told the New York Times that he expects more carriers to cancel flights to the country despite the monetary cushion.

"Even if Ukraine itself does not close off its airspace the actions of others will greatly reduce the number of flights in and out of Ukrainian airspace," he said.

The move to avoid the country's airspace is not only a reflection of a potential invasion but also the remembrance of Malaysia Airlines flight 17.  In 2014, the plane was shot down by a missile as it crossed a combat zone in the Crimea region of Ukraine where Russia invaded, killing all 298 people on board.