It shows that South Africans are waiting longer before they are getting married, and that almost 30% of divorces were for marriages that lasted between five and nine years.

Here are some of the key findings:

Fewer people are getting married You are most likely to first get married at 34 if you’re a man, and 31 if you are a woman

For first-time marriages, the median ages for men and women were 34 years and 31 years respectively in 2017.

This has been on the increase – five years ago, it was 33 and 30 years, respectively. 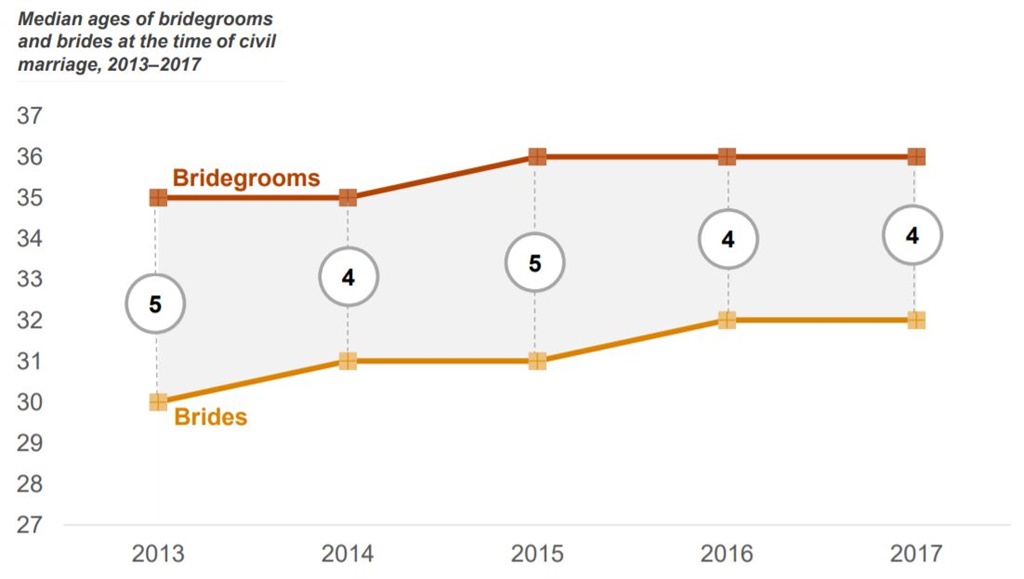 The vast majority of grooms are older

In heterosexual marriages, more than three-quarters of bridegrooms were older than their brides. Less than 16% were younger and the rest were the same age. The average age difference between brides and bridegrooms is 4 years.

However: there is a big exception if you marry a female divorcee. Then, more than 44% of men who haven’t been married before are younger than their new wives.

Wedding seasons start in September, and there's a second peak in Easter The warmer months (beginning from September and peaking in December) are the most popular months for weddings in South Africa. A second peak occurs in March or April, depending on the month of the Easter holiday for that particular year, says Statistics SA.

45% of divorces happen within ten years

The largest percentage (27.2%) of divorces were for marriages that lasted between five and nine years, and 17.4% for those less than five years.

Almost 20% of divorces were for marriages that lasted between ten and 14 years. The white population had the highest proportion (22.0%) of divorces that occurred in the first five years Men are most likely to get divorced at 44, and women at 40

The median age at the time of divorce in 2017 was 44 years for males and 40 years for females.

For males, the peak age group at divorce was 40 to 44 for all population groups, except for white men, where the highest peak was from the age group 45 to 49 years.

The Western Cape has the most divorces

The Western Cape saw more than 6,000 divorces in 2017 - the province with the highest number of divorces granted. That's despite only 16% of marriage taking place in the Western Cape, compared to more than 26% in Gauteng.

More than half of divorcing couples had children younger than 18