I went to an English castle that claims to be where afternoon tea was invented. Why I want to go back. Belvoir Castle in England claims to be the place where afternoon tea was invented in the 1840s. On a recent trip to my native UK, I decided to pay it a visit for the first time. I brought my family with me to afternoon tea at Belvoir Castle.
Brendan Sainsbury

On an unseasonably warm Friday morning in late March, I travelled to Belvoir Castle from London with my wife and son.

Our main reason for visiting the sprawling stately home in Britain's East Midlands was not to meet dukes and duchesses or peruse shiny suits of armour, but to partake in afternoon tea. After 18 years of living in Canada, the longstanding English indulgence remains one of the things I miss most about my native country.

Belvoir claims to be the place where the ritual was invented in the 1840s by Anna Russell, the Duchess of Bedford, and a close confidante of Queen Victoria.

Still in private hands, the castle remains the home of the Dukes of Rutland, hereditary peers who have lived at the property for half a millennium. The current Duke shares the building with his wife, the Duchess, and their five children. Open to the public in recent times, the house is feted for its art, history, and famous tearoom. In the last 20 years, it was also used as a filming location. "The Da Vinci Code" and "Young Queen Victoria" were both filmed here. The first incarnation of the castle was built in 1067, while the current Gothic Revival structure mostly dates from the early 1800s. Its French name means "beautiful view," in reference to its strategic position.

Our one-hour train journey from London Kings Cross brought us into the mid-sized market town of Grantham, from where we called an Uber to drive us the final eight miles through the English countryside to Belvoir. Once there, we climbed a steep path past mature beech trees to the hilltop citadel.

The initial view of the building with its towers and turrets framed by yellow daffodils was dramatic. The first sight of the castle walking up the path from the entrance gate.
Brendan Sainsbury

I paid extra to view the castle's opulent interior rooms. 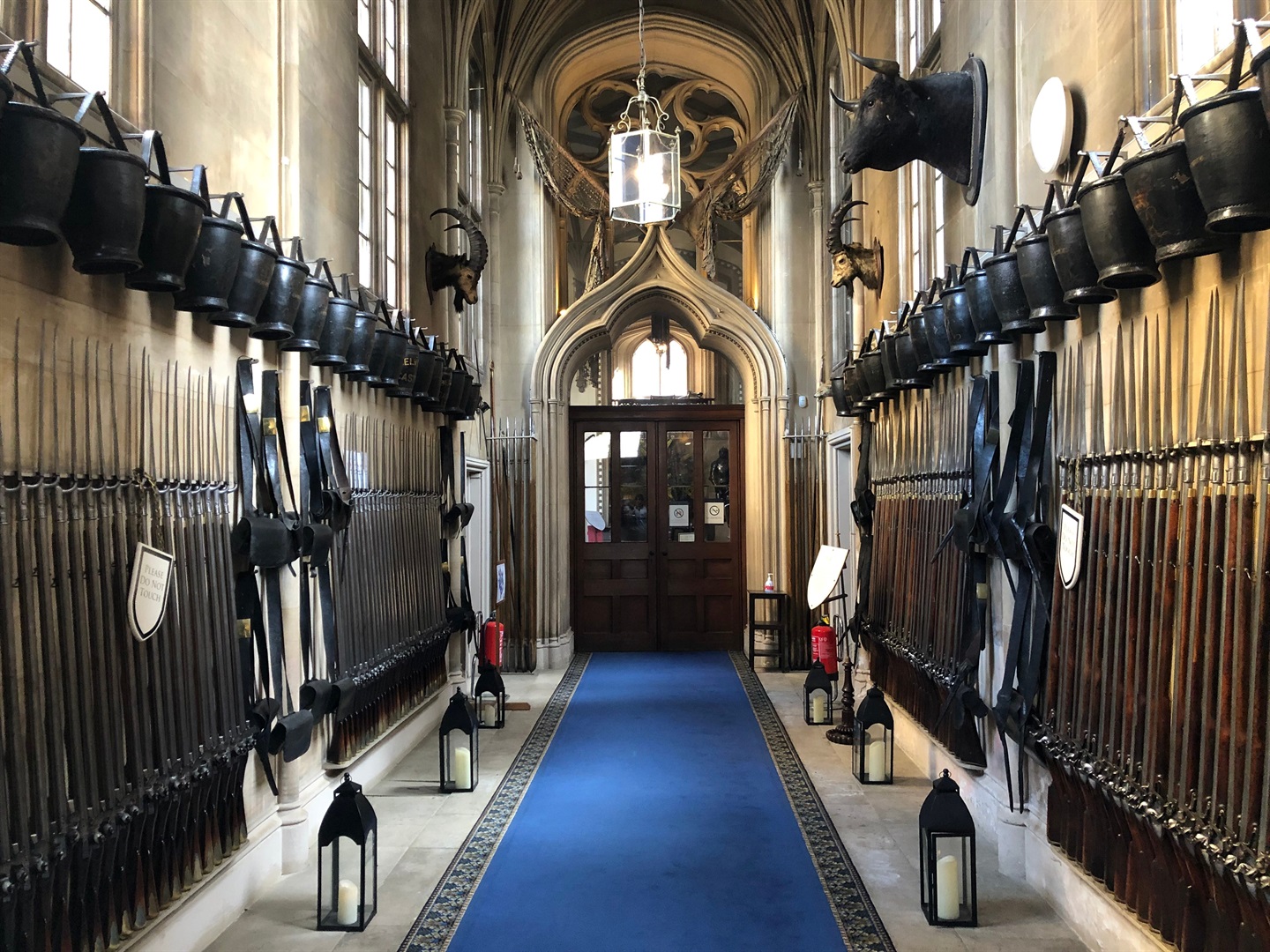 Arriving well before our allotted slot, we browsed museum-worthy rooms, which included an art gallery, a ballroom, and the Elizabeth Saloon. I saw paintings by the likes of Holbein and Van Dyck on the walls, alongside regal décor such as heavy drapes, elegant chandeliers, and Louis XV furniture. While there were many other visitors, the generously sized house felt far from crowded, especially compared to my experiences at other English stately homes like Blenheim and Buckingham Palace.

There was no dress code for tea at the castle, although most of the people I saw were well dressed. The Elizabeth Saloon was seen in the Netflix show, "The Crown."
Brendan Sainsbury

Several of the rooms, including the Elizabeth Saloon, were used in the first three seasons of the Netflix series "The Crown," when Belvoir stood in for Windsor Castle.

But my main focus was the Aviary Tearoom, which I found to be bright and contemporary, with flower garlands above the windows and bird-themed frescos embellishing the walls.

We were shown to a semi-circular window seat and sat down amid a hum of quiet conversation emanating from two dozen or so other guests. There was no dress code, although most of the clientele opted for casual-smart attire. I noticed ladies in florals chatting with well-dressed gents in open-neck shirts. One I saw donned a smart blazer with a neatly folded handkerchief.

My 16-year-old son, who had elected to wear a Tottenham Hotspur soccer shirt, looked distinctly out of place, but fortunately, drew no comments.

Our table was set with well-polished china and cutlery and an extensive tea menu. The menu from The Aviary Tearoom at Belvoir Castle.
Brendan Sainsbury

My son and I plumped for a pot of black Yorkshire tea, which in 2019 usurped PG Tips as the UK's number one selling tea brand, while my wife opted for a fruitier peach and orange varietal, one of several on offer.

The tea arrived in bespoke teapots emblazoned with the Rutland family motif – a peacock. The wait staff brought out our pre-ordered £50 (R991,00)-afternoon tea about 10 minutes later, a tiered tray of cakes, finger sandwiches, and scones.

The delicate sandwiches, bookended with a mix of brown and white bread with the crusts cut off, were stuffed with smoked salmon, cucumber, and egg and cress. Mini-cakes included brandy snaps, Battenburg, Florentines, and – my favorite – carrot and walnut squares. With an hour to enjoy it, we savored every mouthful.

For me, the make-or-break of any afternoon tea is the scones. Get them right and I'm pretty much sold. I thought the scones were the best part of the whole spread.
Brendan Sainsbury

At Belvoir, I was pleased to find that the scones on our tea tray were homemade and generously proportioned. Each person received two: one fruit and one plain. Still light and flaky from the oven, they crumbled under my knife as I piled on clotted cream and strawberry jam.

As a stickler for detail, I always assemble my scones using the so-called Devonshire method putting the cream on first, followed by the jam (the Cornish method does it the other way round).

My one small criticism of Belvoir's spread was there wasn't enough cream and jam. Call me greedy, but I treat afternoon tea as a rare holiday luxury and, consequently, like to heap on lavish amounts of clotted cream.

Complementing the tea spread, the table service was excellent. Our amiable server was a mine of interesting information about the castle, which she generously imparted, despite the busy tearoom. Famous previous guests have included Winston Churchill, Isaac Newton, and several English monarchs, she told us. The most recent visitors were the pop group, Duran Duran, she said.

Post-tea, we continued our tour of the castle with a walk outside through the extensive grounds culminating in the two-mile-long Duke's Walk. A bust of the Duke of Rutland on the Duke’s Walk at Belvoir Castle.
Brendan Sainsbury

From certain points on the hill, I was able to pick out the distant towers of Lincoln Cathedral, once the tallest building in the world. It felt like a fitting end to a spectacular day.

My verdict? We might have only come for the tea, but Belvoir Castle with its lush grounds, refined rooms, and beautiful views makes for an excellent day trip from London. I recommend Belvoir to anyone looking for a classic dose of English culture and a break from the frenzy of a big city. Just be sure to reserve tickets online, both for afternoon tea and for your train into town. LNER runs regular trains from London Kings Cross to Grantham, though you'll need a taxi from there and back to the station, so make sure you book your return taxi to Grantham station several hours in advance, as all the remote beauty also means a ride back can be hard to come by.

I enjoyed my time at the castle, and appreciated that the staff was always on hand to proffer priceless nuggets of information. I also thought the tea lived up to its historic reputation, crumbly scones and all. Though I wouldn't mind an extra helping of cream and jam if I'm totally honest.

Related Links
A decision by Europe to protect Rooibos is now attracting tea tourists to the Cederberg
Drinking 4 to 6 cups of coffee and tea a day may reduce risk of stroke and dementia, study
Bill Clinton wanted to eat Indian food ‘like a tourist’, turned down tea invite from Queen on UK...
Next on Business Insider
British Airways passengers wait days to be reunited with their bags amid Heathrow luggage mountain