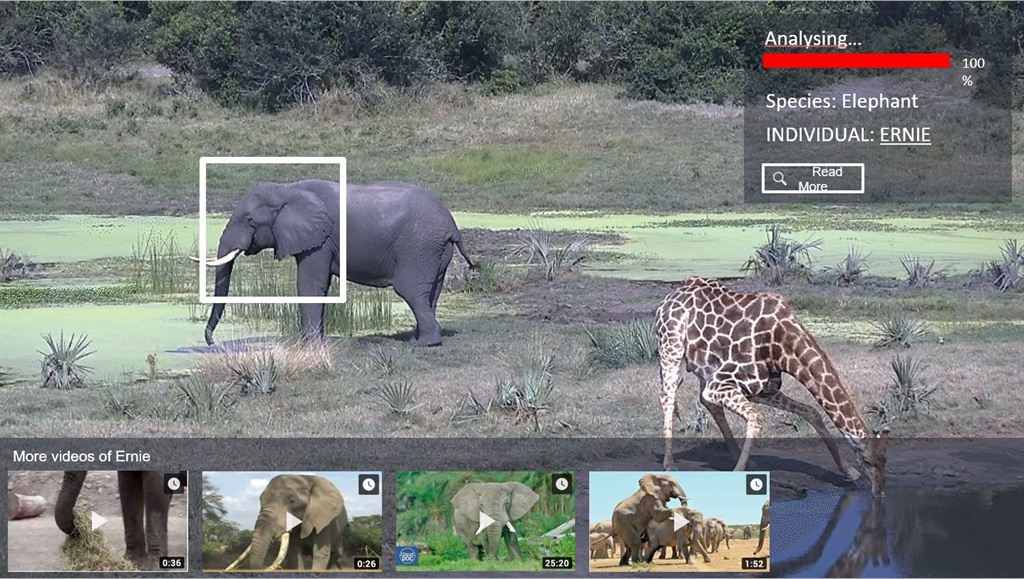 Rekognition can identify the animals individually, like this giant tusker elephant Ernie at the Tembe Elephant Reserve. Photo Africam

A South African livestream wildlife channel has taken game viewing to the next level by teaching machines to track and identify animal ‘celebrities’.

Paul Penzhorn, CEO of Africam.com, wanted to bring a global audience on safari without them having to leave their lounge.

"I wanted the 99.5% of the world that cannot afford to go on safari in Africa to experience the beauty of African wildlife and at the same time tell the story of the endangered animals,” said Penzhorn

Thanks to fixed cameras and infrared cameras at night, the channel provides free 24-hour livestreams from some 6 permanent waterholes in game reserves across the country. AI identifying a leopard from its spots. Photo Africam

Africam is taking livestreaming one step further by teaching AI facial recognition software from Amazon to identify animals. Called Rekognition, it can identify the animals individually, like this giant tusker elephant Ernie at the Tembe game reserve.

Rekognition can identify the animals individually, like this giant tusker elephant Ernie at the Tembe Elephant Reserve. Photo Africam

“There are only 20 big tuskers left in Africa. By giving them names and tracking them when they come to the water hole it builds the audience,” said Penzhorn.

Penzhorn says the AI is so smart you could potentially hold up your cell phone camera and have the information pop up in front of you – it can already send out push notifications to your phone via their app.

“As the millennial generation starts taking over the workforce, we are getting more demand for technology-based experiences of the bush. People expect to be able to take out their phones and get information online,” said Penzhorn.

In the not-so-distant future they will have taught the AI to track the animals and move the camera, so you don’t miss out on the action when they come to drink.

Thousands tune in to watch the animals

Thousands of people, for instance, tuned in to watch the story of Gertjie a baby rhino left for dead after its mother was killed by poachers. Its story on Africam was able to raise some R200,000 to help her, says Penzhorn.

The channel can be used to create awareness for grassroots NGOs looking for exposure and who lack the funds to be out in the wild permanently.

“Africam would like to become a platform to tell the stories of NGOs on the ground and raise funds for them,” said Penzhorn. “The problem with wildlife technology is there are a lot of researchers and people doing amazing stuff, but it’s in isolation. We need to create more awareness of what academics are doing to improve the viewers experience.”

The AI is learning to do more than spot the game.

Computers can now automatically label objects, concepts and scenes in images, and provides a confidence score. There more data its given, the more complex the identification can be. Photo Africam

The AI is starting to move beyond just recognising animal celebrities - the collected data will in future be used to combat poaching and predict animal behaviour.

“We are using AI on the cameras and footage from the safari trucks to track the animals and then further predict where they will move during the night to help anti-poaching. We will quickly build up a data base of animal movements and behaviour that can be used by the rangers and conservation.”

In times of drought, for instance, this comes in very handy.

Overcoming the challenges of the bush

The remote locations have limited bandwidth however, and the streams need to be broadcast to the US and Europe, where their main viewership is based.

“These days you only get one chance with your audience. You can’t afford to have your server crash if the story of your animals is going viral. We needed to find something that is able to handle huge spikes in server traffic," said Penzhorn.

Two years ago they began to make a transition to Amazon Web Services (AWS), software that effectively acts like a “Virtual CTO” that allows them to stream live HD to the cloud.

Many South African companies like Pick n Pay, Old Mutual and TymeBank have migrated to AWS to cut down on the costs of licensing and third-party programmes needed to operate their AI, apps and online services.

The cameras also need to be animal and nature proof – Penzhorn says elephants and monkeys often find the cameras and rip them out of their hiding spots.

“We are constantly having to repair cameras due to lightning strikes and bad weather - but this is Africa and what makes the whole experience unique,” said Penzhorn.