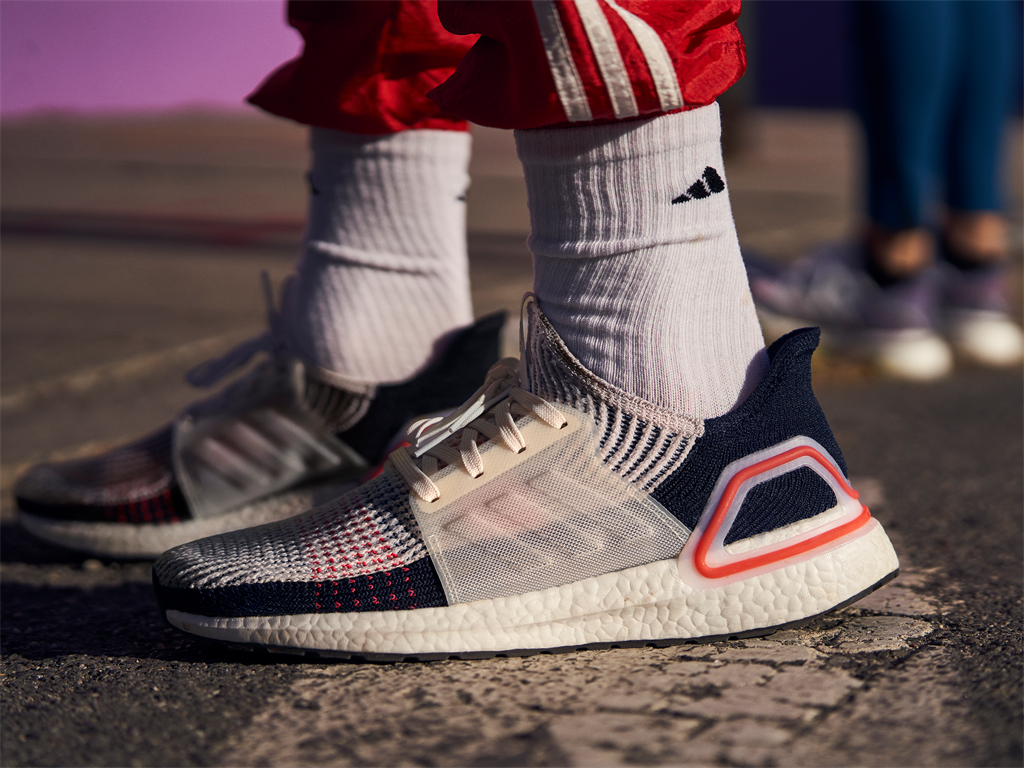 I've said it before, and I'll say it again. Adidas makes the most comfortable sneakers ever - and it's all because of Boost technology.

After I was introduced to the cushioning technology in 2015, I went on a bit of a Boost craze, racking up nine sneaker purchases over the next three years. I bought one pair of Yeezy Boost 350s, three pairs of Yeezy Boost 350 V2, two pairs of NMD R1 Primeknits, and three pairs of Ultra Boosts. While the Ultra Boosts were the easiest to acquire and the least valuable, they were easily my favourite.

They had, in my opinion, everything that makes up a perfect shoe. A lightweight and breathable Primeknit upper, a full-length Boost midsole, plenty of support and rigidity from the Torsion plate and rear heel cups, and an overall look that's both sporty and casual. I would wear them to the gym and on normal days when comfort was a priority and I never thought twice about wanting an improved design from Adidas - that was, until the Ultra Boost 19 released. I personally saw great improvements between the original and V2 versions of the Yeezy Boost 350, which is a lifestyle sneaker, so I was very eager to see how Adidas could improve on a true performance shoe like the Ultra Boost. The brand sent me a pair of the Ultra Boost 19s to test out, and I was thoroughly impressed with all the updates that went into the redesign.

Do the updates make a noticeable difference?

The short answer is yes. In my experience with sneakers, any time a brand can minimise a shoe's design, it usually makes for a more comfortable shoe - and such is the case with the Ultra Boost 19. Not once have I ever complained about my original Ultra Boosts being uncomfortable, but after wearing the Ultra Boost 19, it shows there was room for improvement after all. Ultra Boost (top) and Ultra Boost 19 (bottom): Take a look at the key elements of each shoe. The Primeknit, lace cage, and heel frames even look lighter on the new design.
Adidas/Amir Ismael/Business Insider

Although the general rule of thumb for running sneakers is the lighter, the better, I was initially concerned that making an already light shoe even lighter would take away from its structural integrity. But after wearing the Ultra Boost 19 for a while, I found out that they're still extremely stable.

This is the first Adidas sneaker I've worn with Primeknit 360 material and it's more form-fitting and stretchier than the normal Primeknit. These characteristics make the material lighter without sacrificing stability. I also really like how the heel frame is a rigid 3D printed outline rather than a solid piece of plastic. It's great to see Adidas stay ahead of the innovation curve by employing modern production methods like 3D (and even 4D) printing.

The lace cage is also lighter, although I believe it's always been used as a clever way to incorporate Adidas' Three Stripes branding rather than a means for structural integrity -which is why the brand has released equally sturdy Uncaged versions in the past. Ultra Boost (left) and Ultra Boost 19 (right): The new heel frame is 3D printed, rather than being made of solid plastic.
Adidas/Amir Ismael/Business Insider

How more Boost improves the shoe

While the upper of the shoe is largely redesigned, I believe the most notable update is the new midsole with 20% more Boost. When you take into consideration that Adidas added more of anything and still managed to shave off weight, it's impressive to say the least. It would have been interesting to see an even bigger increase in Boost that brought the shoe back up to 312 grams (since that's still not a heavy shoe), but I'm sure the designers at Adidas put a lot of research and development into the final design - and it really shows in the on-foot performance.

Compared to the original Ultra Boosts, the Ultra Boost 19s are a lot more cushioned and comfortable. If you've worn Ultra Boosts in the past, you'll notice the difference immediately while walking or running. When it comes to working out, I'm not the most avid runner, but with the Ultra Boost 19s on, I actually want to run. The shoes make the constant impact from running a lot more forgiving, which allowed me to run on a treadmill longer than I usually do. For people who are already used to long distance runs, I'm sure you'll appreciate the extended comfort if it does nothing for your time spent running. This is the part of the review where I'd usually point out cons or things that might need justification, but I really haven't been able to find any. The Ultra Boost 19 is lighter, more comfortable - and it beats out the original Ultra Boost in every way performance-wise. It's also the same price. At R3,000, the same price as the original Ultra Boost, you won't have to think about paying more for the upgraded version.

If you already own a pair of the original Ultra Boosts, don't get rid of them for the Ultra Boost 19s. You should definitely keep wearing them, as they're still great sneakers. But if you are in the market for new sneakers - whether you're replacing a worn out pair or you just want to add another pair to your rotation - I strongly recommend choosing the Ultra Boost 19.