In a garage; in a spare room of a home, or in a shipping container are some of the places where communities in the Johannesburg Metropolitan area and greater Gauteng have opened community libraries to help educate and provide after-care facilities for the children and people of those communities.

It's libraries of this kind that Book Ibhoni, a bicycle tour operator founded in Soweto, has donated 3,000 books to. Mpumelelo Mtintso a Soweto local started operating his bicycle tourism business along Vilakazi Street in 2018, offering a 10% discount for a tour in exchange for a book. A book donated means you will only part with R585.00 rather than the total fee of R650. 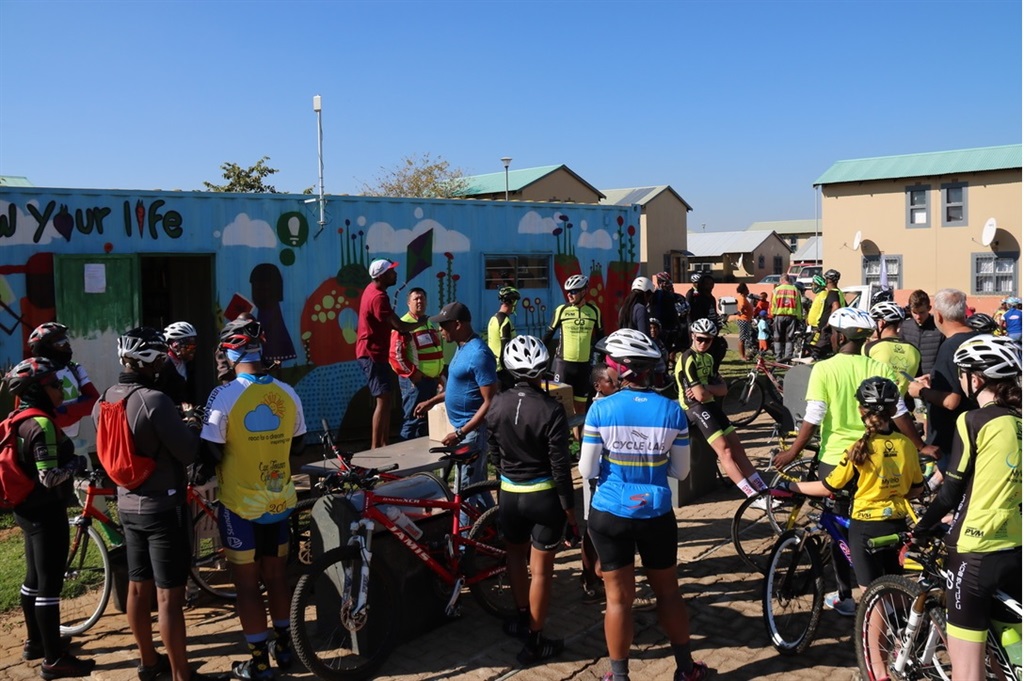 "Tour de Libraries" is when the tour operator and cyclists ride to a chosen library to deliver their collected books. Tours happen either twice or once a year the founder said. Later this month Mtintso and riders will embark on two legs to donate books targeting the inner community in Soweto on March 19 and outside of Soweto. On March 21, they will hold an external leg where they will ride for 65 kilometres to the Bophelong Community Library in Vanderbijlpark.

Inspired by #FeesMustFall protests that occurred across South African universities, he sees, and believes that, through his business he is not only making bike tours affordable but advocating for children's access to resources, and an education by providing books. Drop off books at Riverlea Library in Riverlea, Johannesburg. (Supplied)

Through his project he has helped tourists and companies establish relationships with the community libraries beyond his involvement of donating books. “They adopt and donate to the libraries in their personal capacity," Mtintso said. Of the nine libraries that he has assisted; the common requests he says is that they ask for African literature books written in vernacular, as well as children's books.

When he first started out the founder had no bicycles and home base to call his own. Instead, he'd rent bicycles from local businesses until he could buy his own stock. "My meeting point was Vilakazi Atreet, I'd ask tourists to call me when they reachws the street and I'd meet them there." Cyclists who joined the ride to deliver books. (Supplied)

Today, Book Ibhoni has 40 bicycles utilised for tours and a place to call home, Book Ibhoni Café which opened in February that serves as a drop off point for books. As well as a space for cyclists to gather after or before a ride. Mtintso also says they service, sell and bicycles. They formerly held a pilot programme in a joint venture with the City of Johannesburg to teach the community to ride a bicycle.

It takes you roughly two weeks or 45 minutes to learn how to ride a bike, but he proposes taking lessons for four to five months to learn how to comfortably ride on the road as well "to build confidence". A member of Book Ibhoni cycling team outside the café. (Supplied)

As an avid cyclist who has been cycling since 1995 Mtintso eluded to the importance of establishing and growing a bicycle culture outside of the city. Recently nominated for a South African Tourism Award the founder says that the idea isn't to focus on tourism but on cycling – to teach it to the community and to build a lifestyle around it.

He adds how he sees young children and teens in Soweto embracing the bicycle culture by "pimping out" their bikes. Clubs like Soweto Riders emulates car drifting, but BMX bikes see young teens come together and creatively transform their bicycles with colour, fancy rims, personalised number plates, and customising the entire body of the bicycles.

With their own cycling team that competes competitively. "It [the bicycle culture] is growing at an amazing speed. The culture and market is there," he said.