At this Joburg school, the teacher dresses up as Wonder Woman and the kids learn to become heroes For Teri Ferreira dressing up as her favourite comic book character is not unusual. Going to work dressed up as Wonderwoman was a little more unusual.

This 34-year-old is teaching cosplay to 50 kids at the Chartwell House Montessori Eco School, in Johannesburg.

It’s a South African first, and possibly the world - cosplay will now be taught in the school’s art curriculum. It is all part of bringing out the hidden creativity of the kids aged 6 to 13 years old, inspired by the geeky hobby that is taking over the world. The idea came when the school’s owner, Heather Kreusch, noticed Ferreria put up a profile pic on her whatsapp account of her dressed as the pirate Jack Sparrow, from Pirates of the Caribbean.

Kreusch then thought cosplay could be a learning tool to teach good values along with a strong sense of moral justice and fairness, whilst fueling the children's imagination.

“The first task I gave them was to think of which hero they wanted to dress up as. Then for homework I asked them to raid their wardrobes to find any old clothes from which we can make their costumes,” said Ferreira.

The kids have been encouraged to make cosplays with a budget, using cardboard to make props, like swords.

“I was really feeling my age when the kids mentioned characters I’d never even heard of. But, I blew their minds when I told them they don’t have to cosplay human characters, the could be Pokémon or even My Little Pony,” said Ferreira. “Some of their parents called me and asked if they could also dress up.” 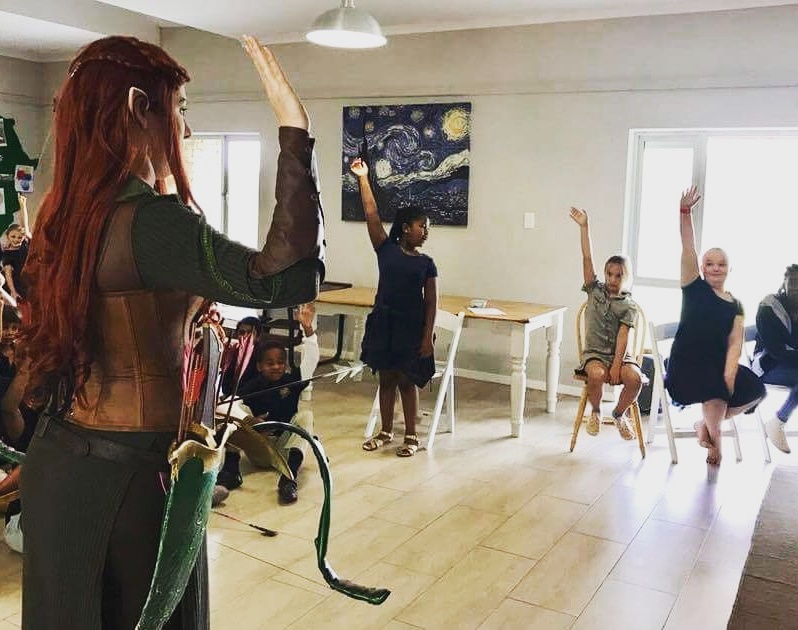 Sophia Chetty, the school’s manger, said cosplay has spread in class. Within a few days of Ferreira’s introductory class, where she cosplayed as Tauriel, one of the elf-characters from The Hobbit, kids were pitching up to school in all manner of the favourite heroes, heroines, princesses and Masterchefs.

“We’ve already seen the shy children’s personalities come to life. We’ve got one child who came to school today dressed as Black Panther. He walked into the school with such confidence,” said Chetty. “Cosplay is offering kids out there something different. We want cosplay to take us to the next level, where learning should be fun and allow them to get a holistic educational experience.”

The kids will make their cosplays for Comic Con Africa, on 14-16 September, where they can take part in the cosplay competition.

“It feels like I am ushering in the next generation of cosplayers,” said Ferreira. Photo: Cosplay South Africa Facebook
Receive a single WhatsApp message every morning with all our latest news: Sign up here.

Related Links
Here's what it's like to play video games on the widest computer monitor in the world
For the first time SA gamers are getting a crack at the Fifa eWorld Cup – and its R2.3 million...
South Africa’s top YouTube channels feature musicians, health fanatics, wildlife – and a guy who...
Next on Business Insider
Sunflower and canola oil prices may decrease by 30% and 15% in the next two months