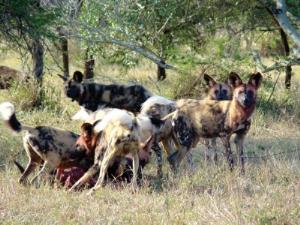 After escaping from a safari park during Storm Ciara, a pack of African wild dogs escaped and killed more than a dozen animals in rural UK.

The BBC reports that the wild dogs escaped from their enclosure at the West Midland Safari Park in Worcestershire last week during what some are dubbing “the storm of the century”.

Storm Ciara brought severe winds and widespread flooding to the UK and Ireland over the weekend.

The storm wreaked damage on the enclosure that hosts the wild dog, allowing twelve of them to escape. They killed six deer and ten sheep in the neighbouring enclosure.

Staff told the BBC they were left "extremely saddened" by the killings. The wild dogs were returned to their enclosure, unharmed.

The African wild dog, which is native to southern Africa can reach speeds of 56km per hour on hunts.

There are only around 6,600 wild dogs left in Africa, and the animals are considered some f the continent's most at-risk carnivores.

In 2018, a number of the animals were repatriated from South Africa to Mozambique. Wild dogs, along with other species, disappeared from parts of that country during the Mozambican civil war between 1977 and 1992.

Read: A pack of wild dogs caught a plane to Mozambique. This is how it went

Related Links
Facebook's Mark Zuckerberg has an unconventional hobby: hunting wild boars with a bow and arrow
Volkswagen ad banned in South Africa for comparing women to wild animals
Growing numbers of wild boars, some of which are radioactive, are menacing major cities across...
Next on Business Insider
Sweden and Finland advance to final stage of joining NATO in response to Russia invading Ukraine