1. Thousands of SA Express passengers were left stranded on Wednesday when the airline grounded flights due to “operational reasons”. It is believed that Airports Company South Africa (ACSA) grounded the planes after SA express was unable to pay outstanding fees. Finance minister Tito Mboweni reportedly refused to give state-owned SA express a R200 million loan guarantee to keep doors open.

2. The fuel price is expected to increase by as much as 9c next week, and the diesel price by 24c, according to new data released by the department of energy. This would mean that the fuel price, which is currently R15.92 in Gauteng, would surpass R16 per litre. The anticipated increase is blamed on a weaker rand.

3. The South African Broadcasting Corporation (SABC) is reportedly looking to increase TV licence fees. On Wednesday, the broadcaster’s chief financial officer Yolande van Biljon said it is technically insolvent and will require additional state financial assistance. The current annual TV licence fee is R265 a year, which all South Africans are required to pay if they wish to use devices which can function as a television.

4. Eskom on Wednesday said the last unit at the Medupi power station produced electricity and was synchronised to the national grid, making it the last unit to be synchronised. The unit is now ahead of its scheduled commercial operation in November 2020 and will ease pressure on the grid. The energy availability of Eskom’s generation fleet is supposed to be as high as 80%, but is currently as low as 69%, and even a 0.1% rise in GDP could result in outages,  Eskom board member Nelisiwe Magubane said last week.

5. The South African Reserve Bank (SARB) is exploring the possibility of an official Central Bank Digital Currency (CBDC). The SARB’s senior fintech analyst Gerhard Van Deventer said proposed CBDC would be backed by the rand and would ideally be useable as legal tender. It is unclear when the Reserve Bank plans to release the digital currency.

Lots of people have million-dollar ideas, but people rarely act on them. Mistakes, too, can sometimes even mean millions - if the timing is right.

For entrepreneurs, one good idea can prove extraordinarily fruitful - even if it's as silly as something like the Snuggie. The Slinky, for example, was born after a naval engineer made a clumsy mistake; meanwhile, the infamous Furby was crafted after its creator was introduced to Tamagotchis, and felt an overwhelming urge to pet it.

Check out some other ideas that left people with millions.

Warner made the decision to not sell the toys at nationwide chains like Toys-R-Us and Walmart, driving up the market at small, independent stores and creating a craze. Some stores even received instructions from Ty Inc. not to sell more than a certain amount to one customer. Beanies began going up on the resale market - many with five-figure asking prices.

Since its creation, it is estimated Beanie Babies were able to bring in nearly $6 billion for Warner.

Today, Warner has a net worth of over $2.6 billion.

Alex Tew had the idea for The Million Dollar Homepage when he was a 21-year-old college kid. He would sell 1 million pixels for $1 a piece in advertising space. The profit? You guessed it. Million Dollar Homepage "sold out" just 4 months after it went up in 2005. It all came about because Tew was interested in making money while also attending Nottingham University in England. And after the site began to gain media attention and all ad space was bought up, he dropped out and began his career as a serial entrepreneur.

He has since gone on to co-found the newly billion-dollar unicorn startup and meditation app, Calm.

What if you could wear a blanket? Scott Boilen, president of Allstar Products, had the same idea, resulting in the Snuggie. Since 2008, over 30 million Snuggies have been sold, raking in over $500 million.

Many people remember the silly commercials in the early aughts for Snuggies: a family at a sports game, all wrapped in blue Snuggies, surrounded by others bundled up in coats, beanies and scarves, cheering, arms raised.

But some others remember the Slanket, which appeared on the shopping channel QVC and airline publication SkyMall years before the Snuggie.

"We had seen products like these in catalogs for a while - even before the Slanket came out, I think," said Boilen to The New York Times in 2009. "And we thought if we could put a clever commercial behind it and offer it at a better value price, then people would buy it."

And clearly, it worked.

The Slinky, created by accident by Richard James, is now in the Toy Hall of Fame, with over 350 million sold and profits reaching $3 billion. James dropped a tension spring he was working with and watched it slink away across the floor - and thus, the Slinky was born. In reality, though, it did not happen that quickly: James spent over two years developing just how long the toy would be and experimented with different formulas to find the perfect slink-down-the-stairs toy he imagined in his head. His wife, Betty, went on to helm the Slinky business when he moved to Bolivia to join a cult. Betty died in 2009.

In her obituary, The New York Times found that the number of Slinkys that have been sold could circle the world over 150 times.

Gary Dahl, an advertising executive, was known to joke. After listening to his friends talk about the perils of caring for a pet, he created the Pet Rock in 1975, putting nearly $6 million in his pocket. 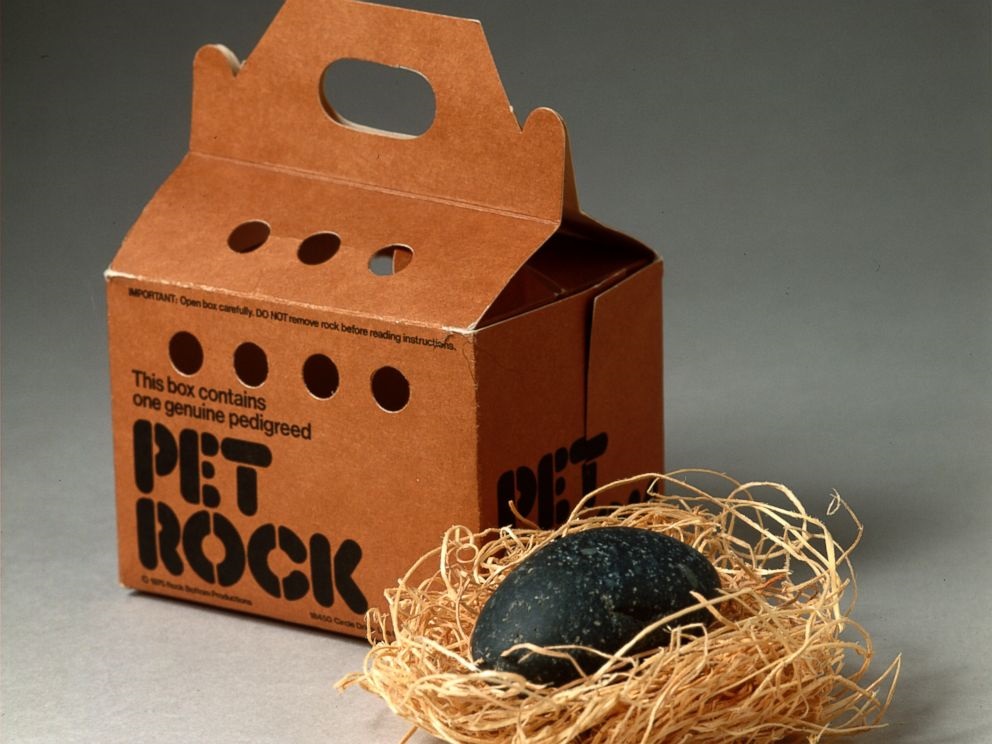 He sold the rocks as "hassle-free" pets, complete with a pet training manual and a cardboard box fashioned after a pet carrier. The rocks were an instant hit and turned into one of the greatest fads of all time.

San Jose-based Dahl tried to replicate his Pet Rock success with other ventures, though everything else eventually flopped, including a book about the "untold story" behind the parody pet and another spoof on fitness.

Furby, the nonsense-talking, furry, hamster-mixed-with-an-owl electronic toy, took over the 90s, but its popularity dropped off quickly thereafter. However, Furby remained a hot toy long enough to make $500 million annually at its peak. 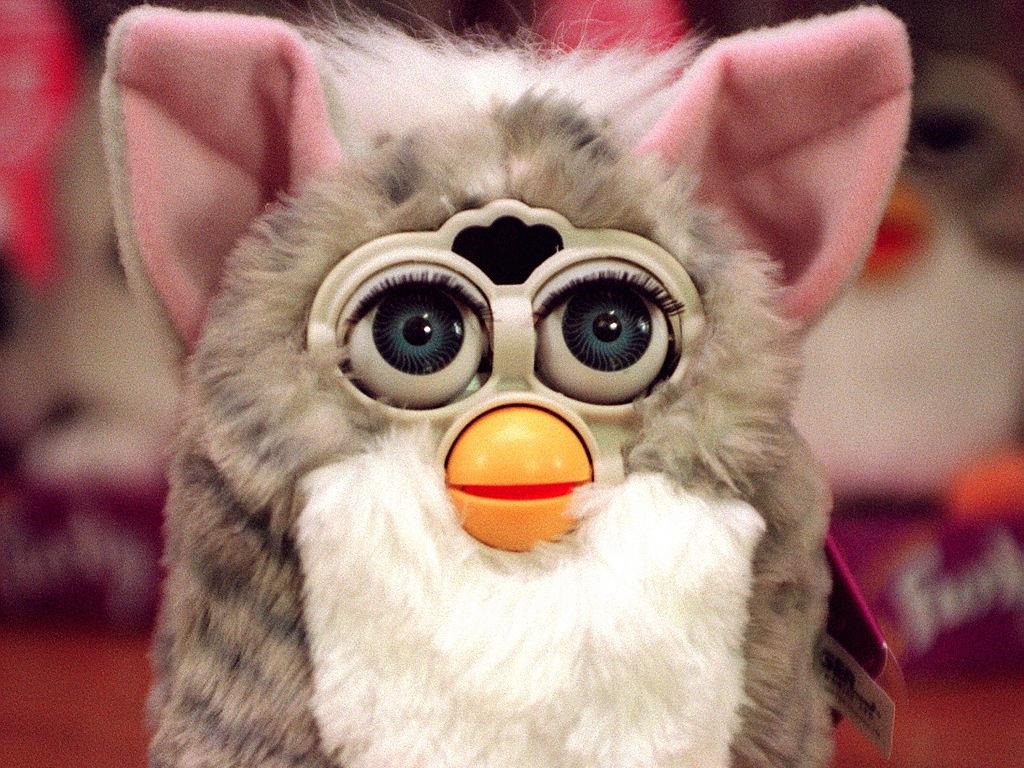 Fun fact: The National Security Agency banned Furbies from its office in 1999, according to a CBS article with the same date, saying the children's toy was a "Chinese-manufactured spy" with the capability to listen in on conversations pertaining to intelligence.

Furbies do not have the ability to record, according to Roger Shiffman, the man who heads Tiger Electronics, which makes the toy. They are known, however, to frequently glitch - talking, walking, and vibrating without cues, sometimes in the middle of the night. Creepy.

In the 1980s, Scott Stillinger invented the Koosh Ball — a rubbery ball with colorful fibers all over it. Hasbro bought the Koosh Ball for $100 million in 1997. Time magazine named it one of the greatest toys of all time. The Koosh Ball came out of a want to have something in between the weight of a foam ball and a bean bag, according to a 1995 Los Angeles Times article.

As Stillinger's company grew, so did the size of the Koosh balls. You can still find over a dozen varieties of the Koosh ball today. And in 1995, business was already doing well: OddzOn, the original maker of the toy, said "millions and millions" have been sold at $5 a piece.

Big Mouth Billy Bass, the famed talking fish known for hanging inside garages and living rooms, was created by Gemmy Industries in 2000 and went on to make millions. Though revenue was never disclosed, some reports estimate the decade's best gag gift made $100 million. It took two years of tinkering for creator Joe Pellettieri to get Billy Bass just right - the moving head, the motorized tail and mouth, all in perfect harmony while singing "Don't Worry, Be Happy," and "Take Me to the River."

Today, you can buy an Alexa-enabled singing bass from Amazon for $40.

Ken Hakuta became a millionaire in 1985, thanks to his Wacky Wall Walker — an eight-armed, slimy toy resembling an octopus, that, when stuck to the wall, looked like it was walking as gravity pulled it down. Millions were sold. But Hakuta didn't come up with the idea for the toy itself. He bought the rights for the original Chinese toy his mother sent him for $100,000 and began marketing it in the DC area.

Sales crawled along until a reporter for The Washington Post stumbled upon his product and wrote about it. The buzz from the article began one of the greatest marketing fads of all time. Within just a few months, more than 240 million were sold, netting Hakuta about $80 million.

For years, you could find the toy in cereal boxes, like Corn Pops, but today you can find them on Amazon and some independent toy stores.

The Chia Pet — clay figures filled with water and coated in seeds that sprout greenery — is a cultural icon. You can buy a chia pet of a dog, cat, bunny, or even the president. The company sells 500,000 every holiday season. At $16 a piece, that means millions of dollars every year. The Mexican herb chia explodes with luscious springs of green when watered.

Creator Joe Pedott credits the idea to his home in San Francisco and an agent at his ad firm's butcher of the name, ultimately leading to its infamous jingle, "Ch-Ch-Ch-Chia!" heard for years on television commercials well into the 2010s. The toy was even included in a New York Times time capsule.

In 1963, Harvey Ball drew a smiley face outlined with a circle and filled with yellow for $45 to liven up buttons and badges. He never trademarked the design, though. Today, SmileyWorld owns the design and makes over $250 million a year. Ball first drew the happy face for his PR company's client, State Mutual Life Insurance. The only money he ever made from the simple sketch was the two-figure dollar amount they made selling it to the client.

Two brothers, Bernard and Murray Spain, stumbled upon the unrealized potential of the smiley. Wanting to start a novelty store, the Spains bought the legal rights to the mark along with the now infamous tag-line, "Have a nice day." The brothers began slapping the image on everything possible - including, most famously, the to-go plastic bag.

The Magic 8 Ball has been an enormously popular fortune-telling toy for decades. Albert C. Carter came up with the idea (tube-shaped, at first) in the 1940s, basing it on one of his working-clairvoyant mom's fortune-telling tools.

Originally called the "Syco-Seer," Carter partnered with a local store owner, Max Levinson, who brought the idea to his brother-in-law, Abe Bookman, for mass production. Their newly-formed novelty company, Alabe Crafts, began selling the Syco-Seer, which was granted a patent in 1948.

Unfortunately, Carter didn't live to see his device become a massive hit in the novelty toy world - but Bookman went on to redesign and rebrand it several times, resulting in the black billiard ball we all recognize now. Today, the Magic 8 Ball is owned by Mattel, and the toy company says they sell a million Magic 8 Balls every year.

While people have been playing with hoops of varying materials all throughout history, the modern plastic Hula Hoop was invented by Arthur K. "Spud" Melin and Richard Knerr, cofounders of the Wham-O toy company. Melin and Knerr got their idea for mass-produced hula hoops from Australian schoolkids using bamboo hoops for exercise. The two started manufacturing brightly-colored plastic hoops in 1958, selling them for $1.98 a piece. The idea took off almost instantly - 25 million Wham-O Hula Hoops were sold within four months. Melin patented it in 1963.