Soldiers secure an area in view of the aurora borealis during night live-fire training as part of Exercise Spartan Cerberus at Fort Greely, Alaska, October 25, 2016.
US Department of Defense

The past decade has tested military alliances and brought on threats few could have imagined.

In many ways, the principles of conflict never change - there is always an enemy to be vanquished, and the consequences are always tragic. But in the past decade, technology re-defined how we fight most of our conflicts.

Whether it's artificial intelligence, disinformation, or hypersonic missiles, this decade's conflicts have been defined by rapid technological advances - and the manipulation of technologies built for civilian use.

From North Korea's nuclear threats to Syria's chaotic battlefield, here are the conflicts that have defined our decade.

Ukraine has become a laboratory for Russia's advanced warfare.

George Kent, the State Department official who testified during an impeachment inquiry into President Donald Trump's allegedly pressuring Ukraine for political dirt, told Military Times in July that Russia tests much of its battlefield equipment and tactics right next door in Ukraine.

"Ukraine is a laboratory of techniques and procedures," Kent said.

Kent, the deputy assistant secretary of state for European and Eurasian affairs, described a sniper "school" on the frontlines of the Ukraine-Russia conflict.

"They just do on the front lines with Ukraine. Much of the equipment that they are developing that shows up elsewhere, including in Syria, they try out first in Ukraine."

Dispatches from Vice chronicled Russia's incursion into Ukraine starting in 2014. At the time, a popular revolution had toppled the pro-Russia leadership in Kyiv, which alarmed Russian President Vladimir Putin.

Russia annexed Crimea in 2014, and supports separatist militias in the Donbass region, on the border between Ukraine and Russia. It even has some of its own fighters mixed in with the troops, The Washington Post reports.

Russia has deployed Wagner Group mercenaries to fight in Ukraine, a tactic that it's strategically utilising and spreading to enhance its influence in Africa and the Middle East. The Wagner Group is now reportedly operating in Syria, Libya, Sudan, and the Central African Republic.

Russia also used hybrid warfare tactics like social media disinformation to foment distrust in the government and to generate support for Russian control of contested areas, which foretold the interference campaign Russia would run in the 2016 US presidential election, The Washington Post reported last year.

Syria's longstanding quagmire of a civil war has gone through several battlefield iterations.

The Syrian conflict has stretched on for eight years, pulling in players as disparate as Russia, Iran, Turkey, Israel, and the US, as well as creating the ideal conditions for the rise of ISIS.

It's also become another testing ground for tactics and technology.

"Syria is not a shooting range for Russian weapons, but we are still using them there, our new weapons," Russian President Vladimir Putin said in a public address last year.

"When we started to use these modern weapons, including missiles, whole teams from our defense industry companies went to Syria, and worked there on-site - it is extremely important for us - to finalise them and figure out what we can count on when using them in combat conditions."

But innovation has gone the other way, too - the Russian military has started developing small drones equipped with ordnance after seeing ISIS deploy them in Syria.

And in the conflict that's morphed from a popular uprising against a dictatorial dynasty, swelling in the intoxicating first flush of the Arab Spring, to become synonymous with desperation, despair, displacement, and brutality. Bashar al-Assad, whose regime is consistently plumbing the depths of inhumanity, is still in power; and astoundingly, due to the latest failure in American policy, stands to regain control of much of what his regime lost, first to rebels, then to ISIS, then to Kurdish-led forces backed by US troops.

ISIS changed the game with its social media recruiting strategy.

Although ISIS is determined to force its followers back into the Middle Ages, it has employed a strikingly 21st-century approach to recruitment, depending heavily on social media to reach followers, especially those from the west.

Larger social media companies like Twitter have cracked down on the group's accounts since it first rose to prominence in 2014. But the group moved on to encrypted social networks like Telegram, the encrypted chat platform. CBS reported in 2019 that the 2015 Paris terror attacks were planned using the messaging app.

It's popular because it claims to be secure, and "Telegram is less likely to crack down" on ISIS groups or members than other social companies, according to Daniel Byman, a senior fellow at the Brookings Institution's Center for Middle East Policy and the author of "Road Warriors: Foreign Fighters in the Armies of Jihad."

There has been a coordinated effort to remove ISIS channels from Telegram, which has had limited success, according to a new piece in Wired. Researchers Charlie Winter and Amarnath Amarsingham describe the shell ISIS networks that have popped up after the European Union's Internet Referral Unit (IRU) blitzed the main ISIS propaganda and foll0wer accounts over the weekend, and at least some ISIS accounts have shown up on the network TamTam.

Speaking to Wired in 2016, New York Times reporter Rukmini Callimachi described how she tracks stories about ISIS and its members online, saying that the group pushed out information on multiple channels simultaneously to reach potential jihadis, or to push out their gruesome propaganda videos. "They've become so good at it, it's unbelievable."

Duterte propelled himself to the presidency in 2016 by promising an end to the drug problem in the Philippines. But his method - thousands of extrajudicial killings - elicited a response from the UN, calling for an investigation into his government's brutal methods.

The Philippines, a US ally in the South China Sea, is killing its civilians without a fair trial. The government acknowledges killing roughly 5,000 people in this effort, but human rights groups say the real number is many times that.

Authorities also arrest those who are critical. Maria Ressa, of the news organisation Rappler, has been arrested multiple times coming to and from the Philippines after critical reporting on the Duterte government and its drug war.

Ressa herself uncovered Facebook disinformation campaigns against her, which were tied to Duterte's government, The Washington Post reported earlier this year.

In the Philippines, where about 95% of citizens who are online use Facebook, the ability to spread misinformation and target specific individuals like Ressa and other journalists is heightened.

Facebook has become an increasingly powerful weapon in Duterte's war on drugs, and his war against the truth. As BuzzFeed reported last year, many Filipinos use Facebook for news because it's free; Duterte and his government have used that to their advantage to drum up spport for his brutal policies and ruin his opponents.

China's well on its way to surpassing the US military, thanks to technological investment — and good, old-fashioned intellectual property theft.

China has emerged as a significant rival to the US on the battlefield. While the People's Liberation Army (PLA) doesn't have quite as much firepower as the US military - it's ranked third on Global Firepower's list of the most powerful militaries, while the US is first - experts are warning that China is quickly catching up to the US, and set to overtake the military technologically.

Speaking at an event at the Council on Foreign Relations in September, retired Adm. William McRaven, who oversaw the SEAL raid on Osama bin Laden's Abbottabad, Pakistan compound, said that the US is facing a "holy s--- moment" because of China's rapid and expansive technological buildup. It's dominating in the fields of 5G and artificial intelligence (AI), and advancing in the development of hypersonic weapons.

China's rise on the battlefield coincides with its economic dominance and an aggressive strategy that incorporates significant state funding into research and development. But China has also been accused of stealing classified national security information from the US.

"The biggest intellectual property theft in human history" is how Defense Secretary Mark Esper put China's strategy of allegedly stealing or copying the plans for weapons like the F-35 stealth fighter.

North Korea has amped up its weapons testing under Kim Jong Un, pushing it closer to the brink of war with the US. 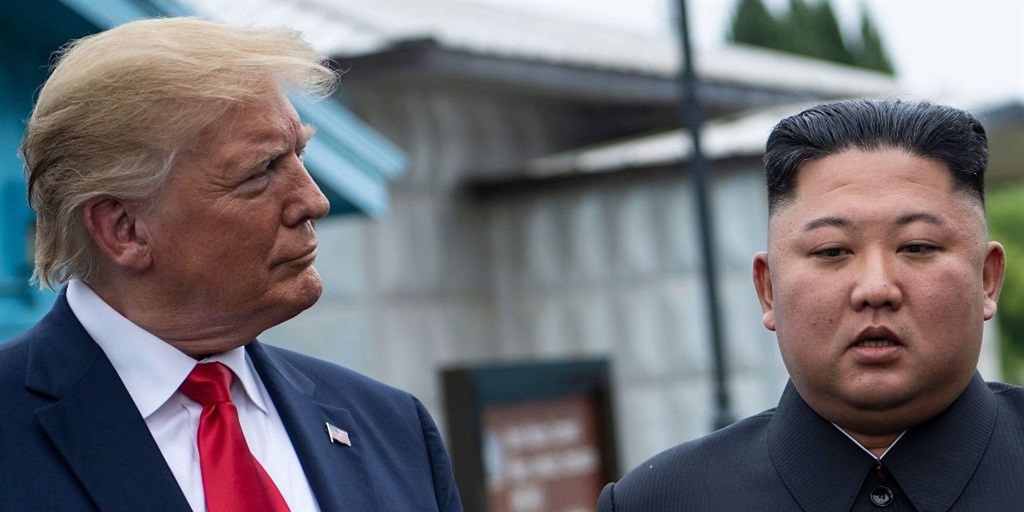 Since Kim Jong Un came to power in 2011, succeeding his father Kim Jong Il, the North Korean leader has sent increasingly threatening signals to the US by developing and testing nuclear weapons.

Kim has overseen four nuclear weapons tests during his tenure, as well as significant and rapid reported developments in its nuclear programs, including the reported ability to miniaturise warheads and the development of intercontinental ballistic missiles (IBCMs) that could, the country claims, strike the continental United States.

As talks between the US and North Korea have broken down under Trump, North Korea has sent threatening messages to the US, indicating that time is running out for the US to offer North Korea something it wants - like the easing of sanctions, or a promise to decrease its military presence on the Korean peninsula - before the hermit kingdom resumes ever more threatening weapons testing.

Iran's strategy of employing proxy militias in wars throughout the Middle East has helped destabilise the region and fueled some of the worst conflicts there.

Hezbollah, the most well-known Iranian proxy militia, has been operating in Lebanon since the 1980s, where they wield undeniable influence in the government and in conflict with neighbouring Israel.

But in the past decade, Iran has been inserting itself into devastating regional conflicts to cement its influence and engage in proxy conflicts with its regional foes, Israel and Saudi Arabia.

Hezbollah militants began streaming into Syria mostly in 2013 and 2014 in support of the Assad regime, which serves as a "vital conduit between Iran and Hezbollah," allowing for Iranian cash and materiel to get to Hezbollah, but also providing a safe location for training and weapons storage, according to a 2014 report from the Institute for the Study of War.

In Yemen, Iran supports the Houthi rebels against the Saudi-backed, internationally-recognised government, in a five-year civil war that has become a humanitarian catastrophe, with the death toll around 100,000 and disease, starvation, and poverty racking the population.

And in Iraq, Shia militias with ties to Iran fight under the banner of the Popular Mobilisation Forces, or PMF. There have been some attempts to integrate the PMF into the regular Iraqi forces, but they are as yet unsuccessful, or only marginally so.

The PMF - and therefore Iran - also has outsize influence in Iraqi politics, which is troubling to many Iraqi citizens and has inflamed protests all over the country since October.