Academics study in the socially distanced reading rooms at the Bodleian Libraries on August 25, 2020 in Oxford, England. The world famous libraries closed in mid-March due to the coronavirus pandemic. After putting in strict social distancing measures the Oxford University Libraries have partially opened for students and academics.
Christopher Furlong/Getty Images

In the late 1800s, German scientist Carl Flügge had a hunch: maybe if you maintain enough physical distance between people who are sick and those who are well, you can prevent the spread of pathogens from person to person.

At the time, it was just a hypothesis, one that scientists like him often tried to test out using glass plates.

But it would take another four decades for technology to advance enough to confirm the idea, with the advent of high-speed photography.

In the early 1940s, scientists finally got their first glimpses of people's sneezes hurtling through the air in real time, at a capture rate of 30,000 frames per second, confirming that indeed, most of the stuff that we throw into the air when we sneeze, cough, or yell, tends to settle down to the ground within about a wingspan or so (say, 0.9 to 2.4 metres).

Here is one of those (revolting) first images: 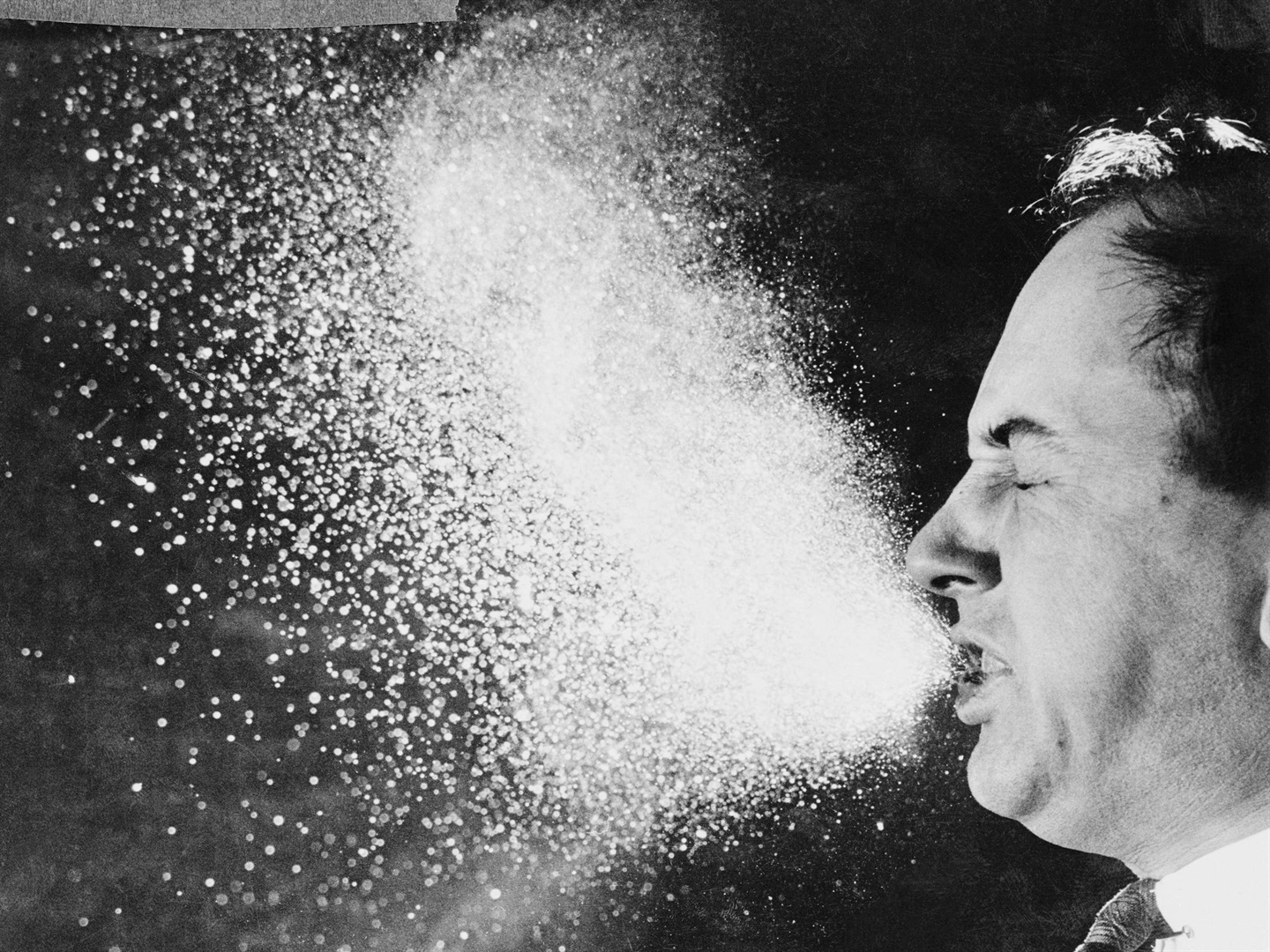 This photo of a sneezer caught in the act was taken by Professor Marshall Jennison from MIT, and published in a 1941 research paper.
Bettmann/Getty Images

When 'the dogma was born'

Back then, scientists maintained that most of the infectious gunk people expel (say, around 90% of their pathogens) travel less than 1.5 metres away.

Their study measurements were never meant to be taken as hard and fast rules about how far we should stand from other people during a pandemic, though.

Nevertheless, these three-to-six-foot rules of thumb have become easy-to-follow protocols for keeping potentially sick people at arm's length during the coronavirus outbreak.

"The dogma was born," Professor Lidia Morawaska, a leading aerosol scientist in Australia, said of the 80-year-old 1.5 metre rule. "Like any dogma, it's extremely difficult to change people's minds, and change the dogmas."

But as the coronavirus pandemic drags on for months on end, Morawaska and other leading air and virus scientists and engineers are starting to lead a charge towards dismantling the old 1.5 metre dogmatic rule, and taking a more thoughtful, nuanced approach to managing the novel coronavirus's spread.

Instead of always being on super-high alert, or assuming that a distance of 1.5 metres (or wearing masks, or washing hands) keeps us 100% safe all the time, we should be learning how better to assess the situations we're in every day, letting our guard down now and again when it's relatively safe, and moving back onto high-alert when it's appropriate.

Can we start thinking differently?

On Tuesday, hoping to inject a little more of such empowerment into the ways that people protect themselves from the virus' spread, researchers from Oxford and MIT released a new traffic light system that they hope will help people do away with antiquated dogmas, and live life to its fullest, while still being careful enough during the pandemic.

"With knowledge and tools that are relatively simple to use, that distill complex information, our hope is that decision makers, local community leaders, school leaders, and everybody that is organising anything like a barbecue or party or a wedding, is empowered to be more resilient, by having the tools to make the right decisions and to impose the right restrictions," Professor Lydia Bourouiba, Director of the Fluid Dynamics of Disease Transmission Lab at MIT, told Business Insider, shortly before her new tool was released in the BMJ.

"We equip people with understanding to adapt in various situations so that they know when they need to be absolutely vigilant, and when they can let their guard down," she said.

The most important things to keep in mind when assessing the riskiness of any situation include taking a look at the environment you're in, acknowledging the density of the crowd, and the activities that people are doing.

The coronavirus doesn't follow binary hard-and-fast rules about infection, and neither should you Environmental scientists like Morawaska say when it comes to talking about how the coronavirus spreads, there's no point in trying to distinguish a droplet from an aerosol, or distinguish what happens at 0.9 metres away versus three What matters most is how much virus has a chance to get into your body, regardless of how it gets there.

Those three modes include people (the most common source of infection), surfaces, and the air.

"These things happen at the same time, and therefore distinguishing what's what is very difficult," Morawaska said.

Life is more dangerous, then, in places where people become animated, excited, or otherwise loud in close confines, with stale air.

In such instances, a distance of even six to nine metres may not be enough to protect you from an infection.

Meatpacking plants are then understandably ripe for viral spread, because "the combination of high levels of worker contagion, poor ventilation, cramped working conditions, background noise (which leads to shouting), and low compliance with mask wearing" all contribute to viral spread, Bourouiba and her co-authors noted.

We need to be able to adapt to different environments with different levels of vigilance, so we're not constantly on max alert A different risk chart, similar to the one that Bourouiba and her co-authors invented for the BMJ, which weighs the relative risks of different activities during the pandemic, based on various criteria.
Dr. Ezekiel Emanuel - University of Pennsylvania, Dr. James Phillips - George Washington University, Saskia Popescu - University of Arizona/George Mason University

Engineers, virologists, and environmental scientists all stress that learning how to live with the virus can be done.

"I think everybody understands what traffic lights are in the general public," Bourouiba said.

She says it's important to have such guides in mind as we weigh how to reopen, gather, and socialize during the pandemic, keeping both our environment, and our behaviors in it, top of mind.

"We need to be able to adapt so that we are not constantly at max alert," she said. "Not just the six foot rule, or the mask on its own." she added.

The simple questions to ask include: How long is the contact? Are people wearing face masks? Is the setting well-ventilated? And will it be quiet or loud?

"It's not rocket science to work out what needs to be done to minimize the risk of infection transmission," Morawaska said.