1. Zimbabwe yesterday announced that it will hold its first set of post-Mugabe elections on July 30. Meanwhile, Zimbabwe - along with 13 other African countries  including Angola, Botswana, Malawi and Mozambique - met yesterday to discuss the viability of using China’s yuan as a reserve currency for the region.

2. Cell C, which currently has a roaming agreement with Vodacom, has struck a new deal with MTN to provide higher speed 3G and 4G services. The company yesterday reported its annual results. Its subscriber number grew 6% to 16.3 million

3. Africa’s biggest packaging firm Nampak - and one of the biggest makers of plastic milk and juice bottles in the UK - also announced its results yesterday. It reported a 10 percent increase in first-half profit on Wednesday, and is stepping up expansion in Africa.

5. Shoprite has been accused of using "dirty tricks" as thousands of its workers strike in Gauteng. In a video, workers can be seen running into the veld as what appears to be private security guards fire rounds of rubber bullets into a crowd.

The race to become the world's first trillion dollar company

Earlier this week, Microsoft's market cap surpassed Google parent company Alphabet's for the first time in three years, as the two tech giants continue on in the unofficial race to a market capitalisation of $1 trillion.

Neither Microsoft nor Alphabet experienced an uptick in share price to contribute to this change. On the contrary, both companies saw decreases driven by fears regarding Italy's political and debt crisis. Alphabet's share price just took a larger hit than Microsoft's, putting its new $742 billion market cap in fourth place, while Microsoft settled into third.

As this chart from Statista shows, the four companies closest to the $1 trillion mark have grown tremendously since May 2009. The other two companies in the race — and the only two with larger market caps — are Apple and Amazon: The former has been relatively volatile but has taken the lead since 2010, while the latter has grown quickly and continuously in the last decade, having been in dead last as recently as May 2017.

This week’s events and the historical evidence depicted in this chart go to show that this could be anyone's race. 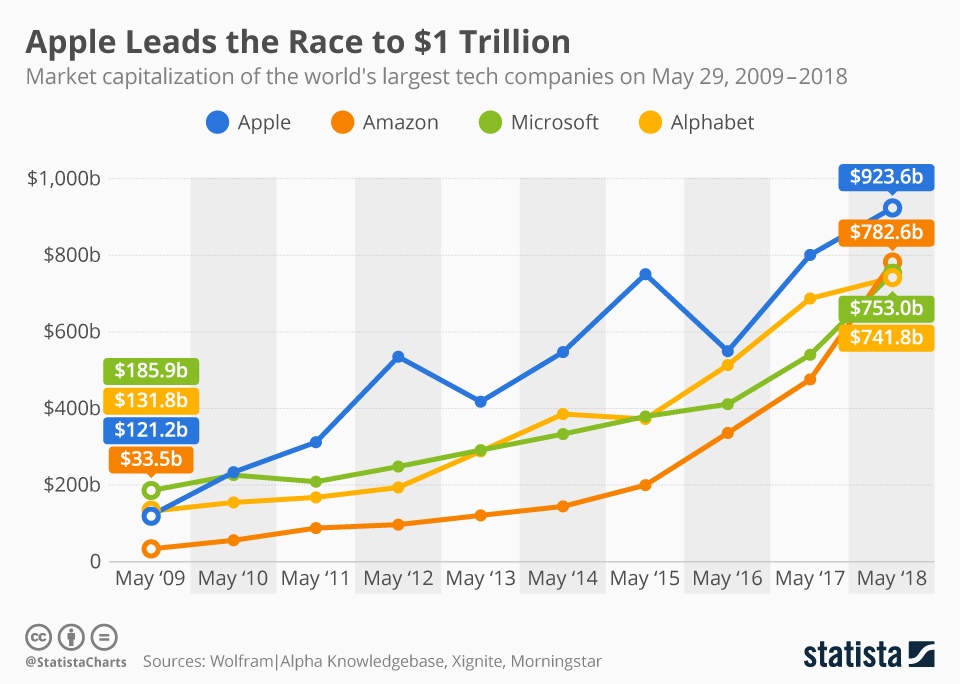