A Sandton office building that once housed SAB is about to become (relatively) cheap apartments: here’s how it will transform It's a common property development strategy in the Johannesburg CBD: take an old office building, gut it, turn it into trendy yet cheap accommodation, and sell or rent out the apartments.

Now, thanks to a glut of sky-scraping office buildings shooting up, the same is happening in the nearby, though far younger, Sandton CBD.

The BlackBrick project has started work on converting a former office building surrounded by the homes of financial services providers, law firms, and media companies, into 208 serviced apartments with extras such as a "meditation garden", boxing gym, and library.

Even though it is considerably more luxurious than the typical inner-city residential conversion, the building is due to be surprisingly affordable – at least by Sandton standards. Rentals are expected to start at R8,000 per month, with studio apartments due to sell at R950,000 each – for a spot two blocks away from Sandton City, and three blocks away from the Sandton Gautrain station.

The building formerly housed the company once known as South African Breweries, and mostly recently called SAB AB InBev, and was as blandly corporate as that implies.

This is how the building is due to transform.

The building, at 25 Fredman Drive, is in the financial heart of Sandton. Though demand for office space in Sandton has been muted of late, estate agents say demand for residential space is high, particularly as traffic into the area grows worse and worse for workers.

The buildings facade was, depending on your vantage point, either grim or nondescript, even by the standard of office buildings. BlackBrick is solving that problem with black paint and plants, lots and lots of plants. A 2017 video from a real estate company shows the office building in all its open-plan glory: a wasteland of tiny cubicles, interspersed with slightly larger cubicles.

That was stripped down to the bare concrete for the conversion to residential units. Now new cubicles are due to be constructed, ones that squeeze living space into the building in a variety of floor plans, including multi-level units. 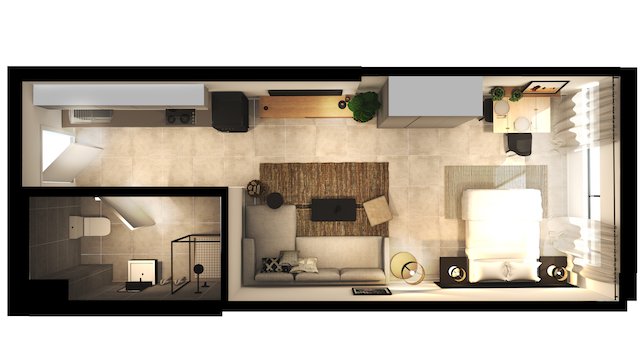 The not overly-large apartments are supplemented by shared spaces that BlackBrick pitches as part of a "residential club" that all residents automatically gain entry to. Although, judging by the developers' artists' impressions, those with R1.7 million to spend on a two-storey penthouse will have enough private space to entertain in-home.