The Rolls-Royce Ghost, which just got its first full overhaul in a decade, doesn't need much of an introduction. It's the expensive sedan people often buy to be driven around in — not by a computer, but by a human chauffeur, because a computer won't make a show of opening the doors for you when you get in and out.

But those looking for an all-new ride won't find one in the new Ghost. While the second-generation Ghost is distinct from the outgoing car, Rolls tweaked, rather than overhauled, a lot of style and comfort elements.

The Ghost debuted in 2009, a smaller and less expensive (lol) option for folks who had a couple of millions to spear, but could quite commit to the much pricierRolls-Royce Phantom. You know, everyday problems. It underwent a few facelifts and changes afterward, including the most recent 2014 "Ghost Series II" refresh pictured in the above comparison, and a switch to an aluminum space-frame platform announced in 2016.

The idea of appealing to the "cheaper" sedan market turned out to be a good one: Rolls calls the Ghost the "most successful product in the company's 116-year history." The dashboard of the new Ghost features a nameplate lit by hundreds of little LEDs. It isn't a screen.
Rolls-Royce

Rolls-Royce said in creating the first entirely new Ghost in a decade, the only things the designers carried over were the famous Spirit of Ecstasy emblem and the umbrellas.

The new, Ghost thus prides itself on a few things: a more minimalist approach, updated exterior and interior styling, illuminating its branding even more luxuriously, eliminating panel lines, all-wheel drive and all-wheel steering, and a 6.75-liter twin-turbocharged V12 engine in place of the outgoing 6.6-liter one.

Rolls says this more minimalist approach — which it has dubbed "Post Opulence" — is "perfectly in tune with the times." Take that as you will.

But Rolls kept the vibe and shape of the Ghost the same, because everyone knows a Rolls-Royce when they see one. Exterior changes came in a few main areas, including more squared-off headlights with sharper illumination lines; a single black grille opening that wraps up and around, kind of like a 64-bit handlebar mustache; and an all-around, slightly more square appearance.

With the updated styling, the new Ghost slots itself right in as a mini Phantom: big, flashy, and extremely rectangular. 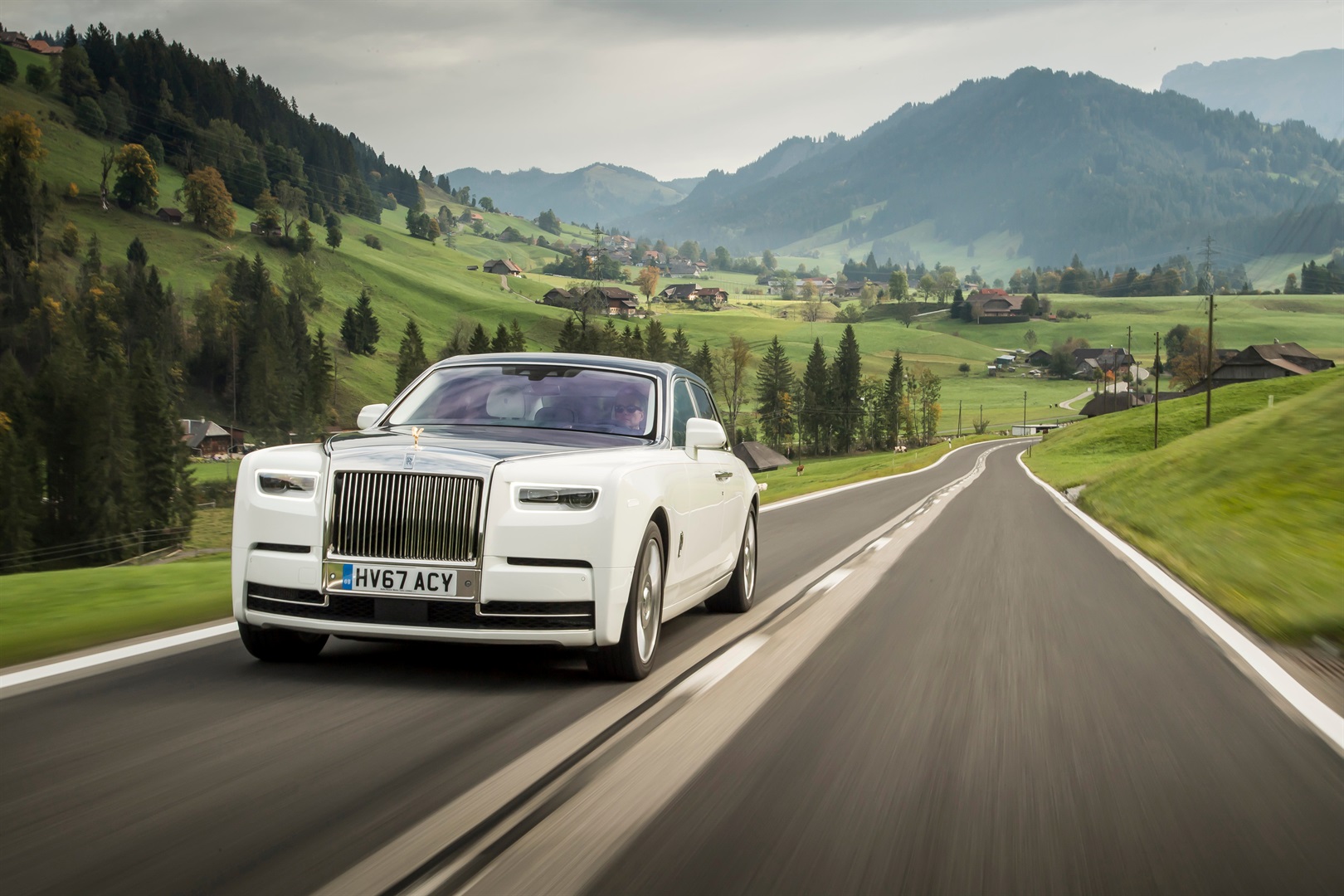 Inside, you'll find a lot of familiar shapes. The infotainment layout and controls don't appear to have changed much, but the accents are new: available open-pore wood in lieu of the glossy stuff, and the new "GHOST" branding across the dashboard, lit with more LEDs than you've probably got in your house.

That's right, the fancy "GHOST" bit on the left is not a screen. It's a bunch of LED "stars" illuminating the dashboard.

The new Rolls-Royce Ghost (left) looks a lot like the old one (right), but with different materials and more opulence on the inside.
Rolls-Royce

Other elements of the car are simplified, yet keep the general character of the Ghost. Rolls wanted to focus on the quality of the materials with this car, not "busy stitching and other devices that create an illusion of luxury by dressing products lacking in substance in a premium skin." Ouch. The Ghost has a 50:50 weight distribution, Rolls said, kind of like a Mazda Miata, or two elephants on a seesaw. Its V12 will make a claimed 563 brake horsepower, and it'll do so in near silence, as far as the passengers are concerned.

So little noise reaches the cabin, in fact, that Rolls-Royce said the silence was disorienting and made a whole show of creating a serene undertone for passengers to hear instead.

Even the vents on the new Rolls-Royce Ghost (left) harken back to the old one (right).
Rolls-Royce

For the new car, Rolls carried over its concept of a satellite-aided transmission, which "draws GPS data to pre-select the optimum gear" for whatever the car is about to do, such as taking an upcoming corner.

That's paired with a camera system to monitor the road ahead and adjust the suspension to approach it in the smoothest possible way, creating what Rolls calls a "sense of flight on land" — flight without turbulence or the sound of the person in the middle seat snoring, of course.

The steering wheel on the new Rolls-Royce Ghost (left) closely mirrors the one on the old car (right).
Rolls-Royce

From the outside, the new Ghost will be bigger than the old one in every dimension. It's almost 14cm longer, 21cm wider, and a 2.5cm  taller than the 2020 model, yet remains in the 2,500kg range — the approximate weight of a Toyota Tundra.

From the outside, the new Rolls-Royce Ghost (left) features taillight tweaks when compared to the old one (right).
Rolls-Royce

Rolls-Royce calls the new Ghost "designed, crafted and engineered from the ground up" when compared to the last one. But in a lot of ways, it follows much of the ethos of the outgoing model — the model that became the most popular car in Rolls' history.

That's because, at the end of the day, you give the people what they like. And the people seem to like their Ghost just the way it is.