Everything you need to know about Budget 2020 – in 18 graphs Here are some of the key charts from Budget 2020 that paint a picture about what lies ahead in this financial year:

The economy will grow by less than 1% this year

Government expects that the economy will only grow by 0.9% this year – and that's with the assumption that exports will grow by 2.3% – while world trade is being ravaged by the novel coronavirus behind Covid-19:

There is a distinct lack of investment in the economy: 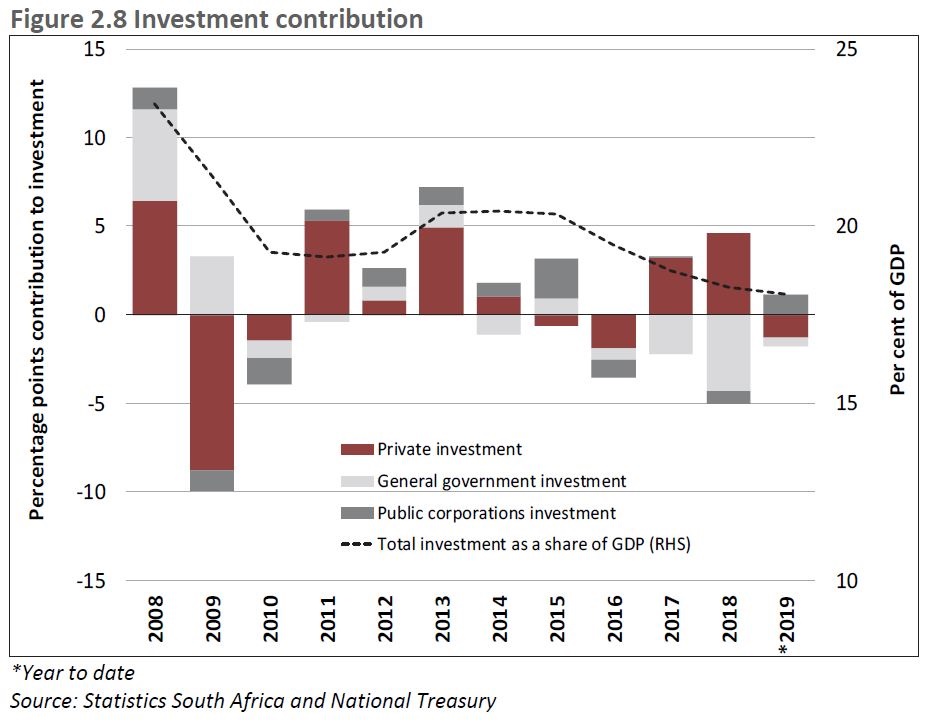 Read: Here are the biggest bombshells in the Budget – including taxpayers getting R2 billion in tax relief

The total government debt burden now equals almost 66% of South Africa’s total economy – and repayments on this debt is growing by more than 12% a year. The amount government is spending on repaying its debts is now rising at a much faster rate than spending on anything else: 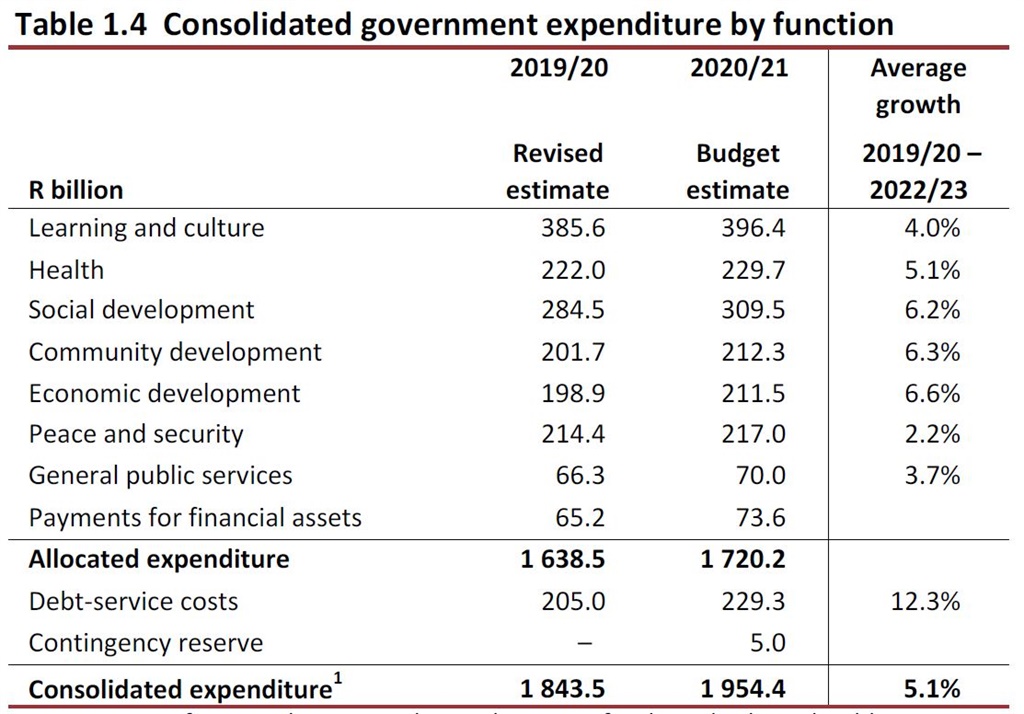 Loan repayments will represent more than 16% of total spending in the next year: Government's debt problem has a lot to do with the spiralling bailouts out of state-owned enterprises: Instead of hiking taxes, government wants to slash the state wage bill.

"Civil servants’ salaries have grown by about 40% in real terms over the past 12 years, without equivalent increases in productivity,” Treasury notes. Education will still get the biggest budget allocation 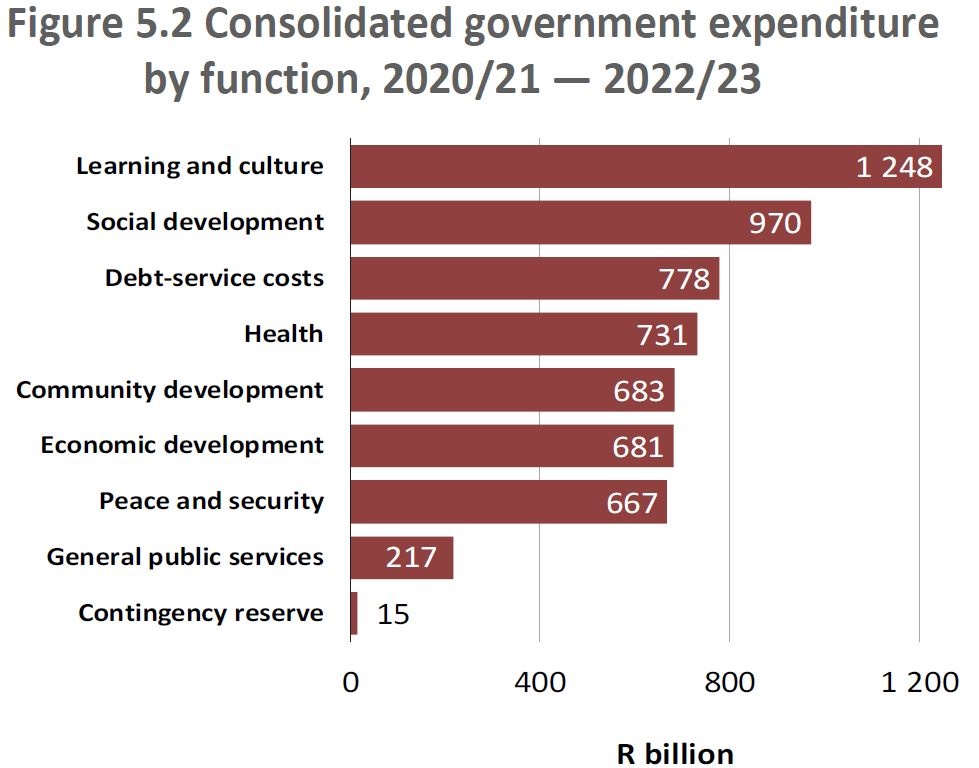 The defence budget has been cut by 0.2%, while police will be getting 2.8% more and the courts and prisons 3.5%. With a budget of R106 billion, policing is now getting more than defence, law, and prisons combined.

Income tax payers will collectively pay R2 billion less in tax after adjustments to the tax brackets. Someone earning R460,000 a year will see their taxes reduced by nearly R3,400 over the next year.

It would be foolhardy to increase tax in this environment, finance minister Tito Mboweni said at a press briefing before the Budget speech. Also, the tax rate in South Africa is high compared to some of its peers: Welfare grants will be hiked in line with inflation

The child grant will be increased slightly higher than other types of social grants. The total number of welfare beneficiaries is expected to increase by almost 1 million, to approximately 19 million people, by 2022/23.

The fuel levy has been increased by 16c, and the levy for the Road Accident Fund (RAF) rose by 9c. The fund is completely underwater, and will face a total deficit of R593 billion by 2022/23, and it is now government’s biggest liability after Eskom.

Read: There’s a plan for etolls, but Treasury says it can’t release it

SA's corporate tax rate is due to come down – eventually South Africa’s corporate tax rate has remained unchanged at 28% for more than a decade – while many other countries have lowered theirs. Treasury now also wants to lower the company tax rate, which it believes will discourage companies from shifting their operations around to get a better tax rate elsewhere in the world.

It is not clear when that will happen.

Sparkling wine and cigars have been slapped with the biggest tax hikes, but sorghum beer is spared

The excise duty on cigars will go up by a whopping 7.5% this year, and tax on sparkling wine will rise by 6%, while the rest of sin tax hikes are in line with inflation. But traditional African beer won't see a sin tax hike. Read: More than 50% of your cigarette price now goes to tax, national treasury says – and more than 20% of liquor

Transfer duties have been increased...

... but the threshold for paying transfer duty has been hiked from R900,000 to properties of R1 million. According to Pam Golding, this is particularly good news for first-time buyers.

The average price paid for a home by a first-time buyer broke the R1 million barrier for the first time ever at the beginning of the year in South Africa – at R1,001,275 in January 2020: The markets loved the Budget

After hitting R15.33/$ early on Wednesday, the rand rallied back to below R15.10 following the Budget: 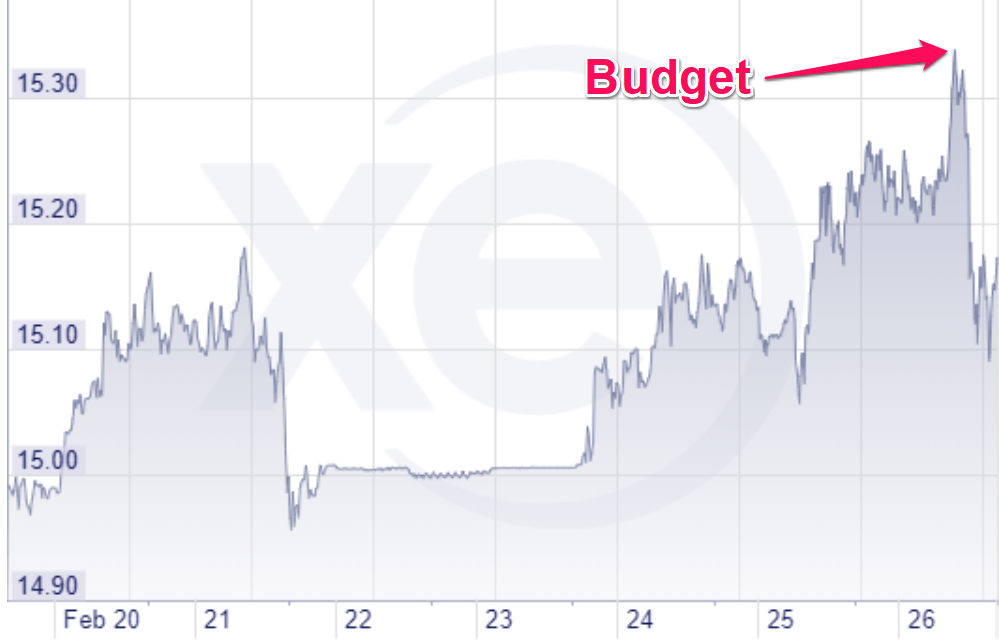 The currency large gave up some of its gains, dragged lower by global uncertainty amid the coronavirus.

But banks and retailers jumped following the news that income tax and VAT won't be hiked. Shoprite's share price rallied by almost 10%, and there was also buying in Truworths (+9%), Standard Bank (+8%), Absa (+7%) and Discovery (+7%).

Budget is better than expected (subject to gov wages savings). Moody's will see this as positive. Deficit projections in line with expectations. Overall Debt levels are better than anticipated. But is all of this good news enough to save investment grade.

This Budget speech actually struck a delicate balance by being both bond and equity friendly, says Chantal Marx, FNB Wealth and Investments.

"Generally what would happen is an equity friendly budget would not be a bond friendly budget. Equity friendly is usually when expenditures are up and taxes are down which would mean that people have more money in their pockets and this is usually good for markets, particularly for the JSE and South African Inc Stocks. A bond friendly budget usually has a decline in expenditure and higher taxes which means more money is available to bond holders and other people who are owed money by government from a broader debt perspective.

"What happened here is that we saw the expenditure being cut to being more bond friendly, because there is more money available in the fiscus to pay debt holders but you also had a stay of execution on tax increases. That was perceived as equity friendly and the reason is that there was a lot of talk in the market over the last couple of weeks of increases in VAT, Wealth Tax, and a new 48% tax bracket and the prescribed assets but none of it materialised.

"What surprised us though is that there was an adjustments on bracket increases - which means if you were earning more money or you had an increase, you would be pushed into a higher inflation and higher tax bracket which means you would compensated and we thought that government would take that as a easy way of raising revenue. So because of the fact that consumers have more money in their pocket or what was usually expected for the next year, the equity market was impacted positively and stocks rallied and banks were up at almost around 4% just after the Budget Speech and retailers also did well," Marx said.

Read: You’ll soon pay 13c more for every plastic bag – with proposals to tax all single-use plastic and straws