Carnarvon in the Northern Cape province is fast becoming an astronomy hub that rivals the best in the world.

It is the site of the 64-dish MeerKAT radio array that is the precursor to the massive Square Kilometer Array which will consist of more than 3,000 linked radio telescopes and allow astronomers to look 13 billion years back in time.

But beyond MeerKAT, several other experiments are also under way in the province because of the low light pollution and clear skies that give sky-gazers an unprecedented view of the night sky.

Here are some of the compelling projects in the province and what they do:

The MeerKAT consists of 64 linked radio telescopes which each stand 19.5m tall and weigh 42 tons. The linking of the instruments allows interferometry - data from each telescope is collated to produce an extremely detailed image.

See also: SA’s new MeerKAT telescope has spotted one of the most magnetic objects in the universe

Illustration of the final HIRAX array in the Karoo desert. HIRAX 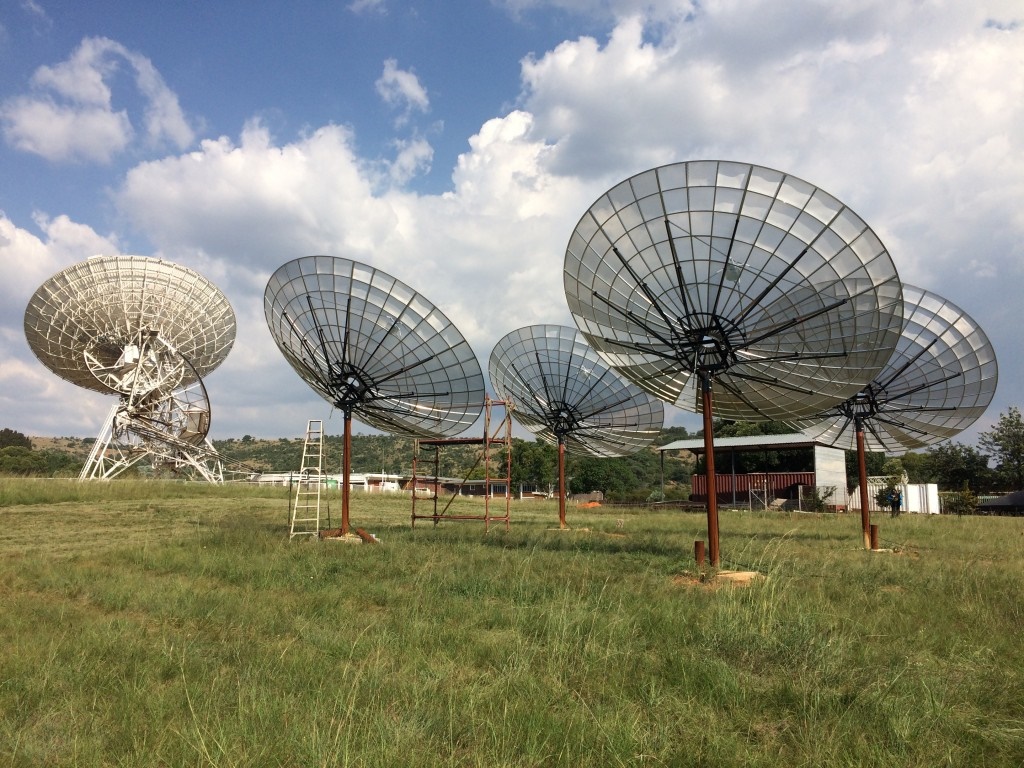 HIRAX (Hydrogen Intensity and Real Time Analysis Experiment) consists of 1,024 6m radio telescopes and will be used to investigate mysterious dark energy which is theorised to provide the energy for accelerated expansion of the universe. This is the period in the universe when the first stars, galaxies and quasars lit up the intergalactic medium. The instrument has no moving parts and consists of 331 antennas of 14m each.

The SKA Africa organisation believes this project is a Nobel Prize-winning candidate. PAPER (Precision Array for Probing the Epoch of Reionisation) is also known as HERA phase 1 and probes the northern and southern hemisphere skies.

It consists of 128 antennas at the Caranavon site and 32 antennas in the US State of West Virginia.

KAT-7 (Karoo Array Telescope) was meant to be a test-bed for the MeerKAT but turned out to be a pretty useful instrument as well.

Its seven 12m dishes are manufactured from fibreglass and its receivers are cooled to -203°C to pick up signals in the 1,200MHz to 1,950 MHz frequency range.

The KAT-7 scored an impressive first observation of the NGC 3109 galaxy.

SALT (Southern African Large Telescope) is the big boy of optical telescopes in the southern hemisphere, situated in Sutherland at an elevation of 1,759m in the Northern Cape.

The instrument's 11m mirror is made up of 91 one metre hexagonal segments made from Astrositall to limit expansion when it gets hot.

Each segment sits on mounts to allow for small adjustments to perfectly focus the image on the payload.

More than 20 research papers have been published in 2018 already thanks to data from SALT. MeerLICHT is a completely robotic instrument and, at 110 million pixels, is the largest scientific CCD camera that can be made.

The instrument is linked to the MeerKAT to match the radio observations with optical data and help astronomers understand puzzling phenomenon such as Fast Radio Bursts.

The uncompressed images from the fully robotic MeerLICHT come in at 350MB, and include positional data and up to one million stars per image, making for superb study data.

The pair of SHOC (Sutherland High Speed Optical Cameras) instruments are 1.9m and one metre telescopes that have four speeds. It is able to take 70 images in one second to study rapid changes in star systems.

HIPPO data has been used for several scientific papers since its launch in 2008. The LCO (Las Cumbres Observatory) is a set of three one metre telescopes installed in Sutherland in 2013.

The instruments are part of a global network which aims to observe objects which appear suddenly like supernovae and asteroids.

The network is currently involved in the research into exoplanets, monitoring the Sun's coolest neighbours, and hunting for supernovas.